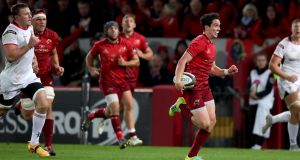 Munster’s Joey Carbery on his way to scoring a try in the rout of Ulster at Thomond Park. Photograph: Dan Sheridan/Inpho

Another home night in the Guinness PRO14 and another routine, even facile Munster bonus point win.

In truth, Munster’s 64-7 victory was also another one-sided romp that did little for the competition’s image and with Leinster looming at the Aviva next Saturday for an encounter that looks likely to be missing many of both team’s Irish front-liners, and then Exeter away a week later, one wonders how much purpose it even served Munster.

Munster were good, very good in fact. Their set-piece was in fine working order. Indeed, their lineout had a 100 per cent return for the first time this season, which was a feather in the cap for Niall Scannell on his seasonal debut. So too their restarts, exits, defence and attack.

In his first game since May with his last employers Toulon, the well-travelled 32-year-old All Blacks scrumhalf Alby Mathewson told Johann van Graan at half-time that he mightn’t be able to last much more.

But in his 50 minutes, Mathewson looked tidy, efficient and lively – even throwing in one quarterback-type quick throw – and so capable of filling that huge void left by Conor Murray’s absence. Outside him for the second week running, Joey Carbery had a couple of gorgeous try-scoring assists and as he’d done in his Musgrave Park debut, marked his first outing at ‘10’ here with a typically effortless-looking long-range try.

Three more tries followed after Carbery’s departure to a standing ovation, including one for Keith Earls on his return, and with Dan Goggin looking the part, their outside four backs made 15 clean breaks.

But, as happens, the more the winning team pulls away, the more it almost devalues what was a record PRO14 win for Munster, eclipsing their 47-0 win here over Zebre in March 2016.

In some respects actually, Munster will have taken as much out of their defensive performance, not least as Ulster brought a relatively decent attacking game. Munster showed a voracious appetite for work in defence after having more defensive holes than a soupstrainer a week previously in Cardiff.

“I actually learned a lot,” maintained Van Graan. “I learned a lot in this week. This game keeps you humble. You’ve got to learn every single day. You learn about individuals, you learn about situations and rugby presents you with different opportunities and different challenges.”

There was an inevitability about Munster’s response to last week’s relatively limp defeat to the Blues. But Van Graan maintained: “I don’t think last week knocked our confidence. We are a very confident group. We have got big dreams and I said from the beginning, a man has got to dream big because big dreams make a man’s blood stir. It wasn’t really a confidence knock, it was more ‘Listen, that wasn’t good enough’.”

Yet after three bonus-point home wins which have yielded 21 tries to two, and two fruitless away games with two tries scored and seven conceded, Munster’s season remains a riddle.

“It is a difficult one to get your head around because we can’t really control a lot of that,” said Van Graan. “All that we can control is our form and we as a squad said it is no good to go one up and one down, we want to be consistent.

“Consistency is one of the words that we targeted throughout pre-season, so we will look for a consistent 80-minute performance next Saturday. The challenge is to do it against the best club team currently in Europe and possibly in the world, so that will be a big challenge to us and one that we are looking forward to.

“Once we started the pre-season you kinda look at the champions of Europe and the champions of PRO14. In that semi-final [last season] we came within one point, they were better than us on that day. We are looking forward to the opportunity to play against them.”

Accordingly, when asked how to assess where Munster are five games into the season, tellingly Van Graan admitted with a smile: “I’ll tell you after the next two weeks!”

Indeed, next Saturday will be the clearest barometer yet as to Munster’s welbeing.

“Most definitely. When you go away in the Aviva against the best team in Europe, it is a reality check.”

Ultimately though, as the tries were being racked up at the end, Van Graan felt sympathy for his counterpart Dan McFarland.

“Look, as a coach this job is pretty tough. He’s a good friend of mine. As coaches we know that one week we are going to be up and the next week we’re going to be down, so I have a lot of empathy for him. We play them again on the 22nd of December on a Friday night, and who knows what’s going to happen.”