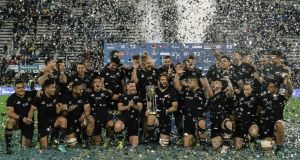 New Zealand’s 35-17 win over Argentina on Saturday sealed not only a third consecutive Rugby Championship - and a sixth in seven years - but also gave the world another ominous reminder of their strength in depth a year from the next World Cup.

The world champions were missing several regulars in Buenos Aires, particularly in the pack, with Joe Moody, Owen Franks, and captain Kieran Read among those absent and Luke Whitelock replaced by Ardie Savea shortly before kickoff after taking ill.

It made little difference as the visiting All Blacks recovered from a shaky first five minutes to dominate a team who have still to record a win against them in 28 games.

“We got better game management,” New Zealand coach Steve Hansen said. “I don’t know if we’re the finished product yet. They are a young team that were out there for large parts of tonight so it was pretty pleasing.”

Backrow Savea was one of the best performers in just his second start and Ofa Tu’ungafasi also stepped up to excel on his first start at prop.

Another back, Karl Tu’inukuafe, was perhaps New Zealand’s best player on the night, further underlining their strength in depth.

The All Blacks, who bounced back from the defeat against South Africa two weeks ago to avoid a second consecutive loss for the first time since 2011, have been particularly clinical in the scrum in this Rugby Championship.

They won all their nine scrums against Argentina to take their total in the five games so far to 31 won and none lost.

They are the only team in the tournament with a 100 per cent record in the department, and assistant coach Ian Foster was pleased to maintain their supremacy against a team known for their scrummaging ability.

“It was great performance from our scrum and that is probably a mark of respect because we know it is a big part of the Argentinian psyche,” Foster said. “So it is something that we targeted, we wanted to do it well and we got a good result.”

The backs also rarely looked in trouble, with one wing, Waisake Naholo, grabbing one try and another, Rieko Ioane, scoring two more to take his total to 20 in 19 games.

Beauden Barrett recovered from a disappointing match against South Africa two weeks ago to score all four of his conversion attempts and Sonny Bill Williams will be delighted to get some game time under his belt after three months out injured.

It all bodes well for the three times world champion as they build up towards next year’s World Cup in Japan.

New Zealand are in Pool B alongside Italy, South Africa, Namibia and the winner of a playoff. Before that, the All Blacks will round out their Rugby Championship duties next week against South Africa in Pretoria.