Rassie Erasmus admits South Africa should have given Australia ‘a hiding’ 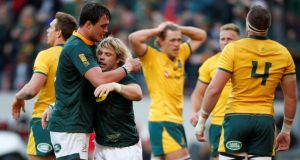 South Africa coach Rassie Erasmus praised his side’s defensive effort but says the Springboks should have given Australia “a hiding” in their 23-12 Rugby Championship victory at the Nelson Mandela Bay Stadium on Saturday.

The sides scored two tries each, with the Boks crossing early through wing Aphiwe Dyantyi and scrumhalf Faf de Klerk, but after spurning a number of other opportunities, were then forced to defend for most of the second period.

Erasmus was left frustrated by his side’s inability to kill the game off sooner, but was able to celebrate back-to-back victories in the competition after South Africa’s shock 36-34 win in New Zealand a fortnight ago.

“I think tonight we created more chances than we did against New Zealand and if we had converted some of those the game would have gone very differently,” Erasmus said.

“If we’d taken them we could have given [Australia] a hiding. In the second half we didn’t play well but we showed a lot of character once again.”

Erasmus has continued to experiment in the Rugby Championship as he builds towards next year’s World Cup in Japan and was pleased to have been able to make eight changes and still come away with the win.

“In the past couple of months when we made changes, we lost matches so to make eight changes and beat Australia is something to celebrate. Before we start to look at where we need to improve, we should probably enjoy the victory,” he said.

The Boks kept Australia scoreless after the interval and have conceded only 38 second-half points in their five Rugby Championship matches this season – a vastly improved defensive effort from previous years.

“I think the guys are getting the hang of the defensive system but it’s not something that you can get right through talking about it or on the training ground. It’s something you have to make mistakes trying, and learn from those mistakes,” Erasmus said.

Under-pressure Wallabies coach Michael Cheika also lamented Australia’s failure to convert their chances but says his side will ride out the tough times and emerge stronger.

With Australia only winning two of their past eight matches, Cheika is under huge pressure to round out the tournament with a victory and show that they can be competitive at the World Cup in a year’s time.

The latest defeat is likely to trigger more calls in Australian media for Cheika’s head but the coach remained defiant.

“No one wants to win more than me, trust me. I think that’s pretty obvious,” he said. “But like I said before tough situations come and then they go away and the tough people will stay.

“I think we made improvements this week and things haven’t been going for us either.”

The performance against the Springboks was an improvement on the abject home loss to Argentina at the Gold Coast earlier this month but the Wallabies continue to frustrate fans with their lack of a clinical edge in attack. They dominated possession and territory in the second half against South Africa but were held scoreless.

“I don’t think we dominated the physical contest enough but we were still able to manufacture a lot of opportunities,” said Cheika.

“I thought we created some very good opportunities then we just couldn’t get the finish on a couple of times.

“It was two tries-all, we basically gave one away and then we had a lot of good footy but you’ve got to capitalise on your moments, don’t you?”

1 America at Large: Golfers guilty of legitimising Trump’s toxic regime
2 ‘This is not a personality contest’ - Jack Nicklaus endorses Donald Trump
3 Solskjær’s stock is on the rise again after clever squad rotation
4 Ireland, France or England? Who needs what to win the 2020 Six Nations
5 Sonia O’Sullivan: Nothing normal about days spent under strict hotel quarantine
Real news has value SUBSCRIBE

‘This is not a personality contest’ - Jack Nicklaus endorses Donald Trump 10:10
Bartomeu bows out with European super league bombshell 09:25
Solskjær’s stock is on the rise again after clever squad rotation 08:58
Dundalk ready to take on Arsenal; Tyrone facing Conor McKenna dilemma 07:22
Ireland, France or England? Who needs what to win the 2020 Six Nations 07:00
Crossword Get access to over 6,000 interactive crosswords