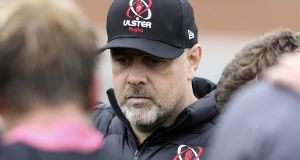 Dan McFarland has made an encouraging start to his first head coaching job in Ulster. Photograph: Ulster Rugby/John Dickson/Inpho

The Mariner’s 1-2-3 Rule provides a methodology for sailors to avoid tropical storms, hurricanes and the like. Complicated stuff for inland folk but the gist is knowing when to reroute a ship while staying afloat.

Should Dan McFarland maintain flat calm in Belfast this season the rugby manuals can invent The Ulster 1-2-3 Rule.

Think about the monumental task before him. Guiding this professional sports club back to safe waters – after the chief executive falls overboard, two coaches walk the plank (one by choice) and a franchise outhalf is banished just as a life raft of retired heroes disappears over the horizon – looks an impossible task.

Oh, and McFarland missed most of the preseason due to contractual issues with Scotland. That’s important because Les Kiss was immediately behind the eight ball having arrived late from the 2015 World Cup. Kiss was faced by an ageing Ulster squad cruelly denied their moment on the summit by Jared Payne’s controversial red card against Saracens in 2014.

There was always the feeling that Kiss was too decent for his own good. McFarland appears to fall into the same category. Not that a successful leader necessarily needs a nasty streak or to rule by fear but history shows that it helps.

There is, however, an established formula for a rugby coach entering a club that just experienced tears in the fabric of its very existence.

Rule 2: Focus on the current group while looking to the future: “Players are all about looking forward, always thinking about the next match, and are not really embroiled in a lot of the stuff that goes on.”

Rule 3: Easy, just win: “I took over a group of young guys who are desperate to be successful.”

These are not McFarland’s words. It’s Conor O’Shea in the wake of the Bloodgate scandal at Harlequins in 2009.

By 2012, O’Shea guided ‘Quins to the Premiership title. Considering the humiliation visited upon the west Londoners and reputational damage suffered by O’Shea’s predecessor Dean Richards over the faking of a blood injury to allow a tactical substitution, a three-season turnaround to capture their first ever domestic title was nigh on miraculous.

The former Ireland fullback continues to behave as more cultural architect than coach. Italy are currently stumping up a lucrative five-year contract for O’Shea to shape every strand of their system.

The IRFU never planned to give McFarland his first head coaching job but with Ronan O’Gara and Paul O’Connell sharpening their technical tools in Canterbury and Paris, the appointment makes sense.

Connacht lost a 15-year servant – player then assistant coach – to Glasgow in 2015. Gregor Townsend brought him into the international arena with zero interest in letting him leave during a World Cup season.

So while the 46-year-old lacks experience, he’s earned this opportunity. Dwayne Peel is the established number two, with Jared Payne providing valuable support, but right about now the trio could do with a Stuart Lancaster-type figure.

Unlike Leinster and Ireland, Ulster are years off delivering quality reserves in every position. The squad looks worryingly under-stocked

Joe Schmidt was by McFarland’s side for the first training session in August and the union were hardly idle since Jono Gibbes decided he had seen enough of east Belfast.

From David Nucifora bullishly removing Ruan Pienaar, to make way for John Cooney, Jordi Murphy moving north and Simon Easterby covering for McFarland while the SRU awaited their ounce of flesh, all this combined to present Ulster as a competitive unit for the beginning of the season. As Paddy Jackson reboots his career in Perpignan – Nucifora refuses to shut the door on his return in 2020 – Billy Burns has shown elements of the potentially that could make him third-choice Ireland outhalf.

But the Ulster squad desperately needs to avoid what already appears to be a mounting injury list (16 confirmed absentees).

Murphy must shake off an ankle problem and do what he did for Leinster at the tail end of his Dublin days.

“We’re always looking for intellectual property,” said McFarland of the versatile international backrow. “As an organisation, we always want to learn and we have our eyes open to what’s going on outside. Out of all the clubs in Europe, if you want to learn something from somebody it is Leinster so it’s great to have him here.”

They will be learning plenty about that culture over the coming seasons. Unless, like in the case of Nick Timoney last season, they lure genuine excellence that slips through bulging Leinster nets.

Some problems remain. Henry Speight, the imposing Wallaby winger, brought an edge to their ranks on a short-term deal but he appeared to wreck his knee scoring that vital 80th-minute try against the Cheetahs last weekend. McFarland refused to be drawn on Speight’s future but “awaiting scans results” rarely bodes well.

Crucially, Ulster have already skipped to Rule 3; winning or at least drawing – see Bloemfontein when Burns converted under serious end-game pressure – matches they had been losing under Kiss.

Unlike Leinster and Ireland, they are years off delivering quality reserves in every position. The squad looks worryingly under-stocked.

The three-quarters line is an issue but the real generational problem up in Ravenhill is props.

Tighthead being the anchor of most teams, Marty Moore was brought back from England to put heat on Rodney Ah You but Moore is currently unfit for purpose, again. Nor have they been making them and South African/Kiwi recruits have failed to deliver since John Afoa followed David Humphreys over to Gloucester.

Humphreys’ departure in 2014 was when it began to unravel. He understandably kept his own counsel but why leave what appeared from the outside to be his ideal career job?

Gibbes and Kiss have also kept private their opinions on the environment.

Anyway, the decks are cleared and Thomond Park tonight presents an opportunity to expose a brittle-looking Munster. Plenty of points to prove on both sides.

Time to move on, sure, but what has McFarland done to deal with the lingering impact of the Jackson and Stuart Olding trial on the squad, and what has he done to rebuild the team culture?

“Success leaves clues and there was success at the end of last season – five games where they won in a row. You go in, look and find out from the people who were there, what was it they were doing that managed to get them over the line [and qualify for the Champions Cup],” he says.

“But also from an outside perspective I had a good knowledge of Ulster rugby, from my past in Ireland and time in Glasgow, about what made them tick, when did they look good. Taking those things and implementing the ideas I feel are needed to run [the team].

“But very importantly you understand the context of the club you are joining and take the best bits from that and join with what you believe in.”

Translation: he is going to focus on what he knows best. Coaching the pack. All the right noises were made this week while being light on actual information.

Twitter should never be used as a primary source – really, we shouldn’t have the damn slot machine in our pockets – but there was a rare tweet by McFarland back in July about The Barcelona Way – unlocking the DNA of a winning culture, a book by sports psychologist Damian Hughes, who wrote: “Lying at the very heart of their success is how they deal with people and the care and attention given to the environment in which those people are nurtured.”

Build away Dan, but keep winning, that’s what guarantees shelter from the storm.

No further players to be called up to Ireland squad to face Georgia 15:14
Jack Grealish admits to careless driving after lockdown crash 13:22
Eddie Brennan steps down as Laois hurling manager 13:14
Thomas Galligan and Cavan raring to meet Dublin in Croke Park 12:30
Willie Mullins’ former star mare Laurina is retired 12:35
Here is your handy guide to sport on television this week