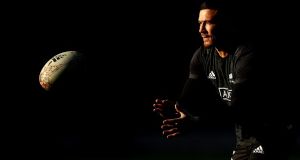 Sonny Bill Williams will start for the All Blacks against Argentina. Photograph: Phil Walter/Getty Images

Sonny Bill Williams will play his first Rugby Championship test of the year and prop Angus Ta’avao looks set to make his debut off the bench after Steve Hansen named a much-changed All Blacks team for this weekend’s test against Argentina on Thursday.

The All Blacks coach made seven changes to the matchday squad that lost to at home to Springboks two weeks ago for the match against the Pumas at Velez Sarsfeld, where New Zealand could wrap up a third successive title.

Lock Sam Whitelock will lead the side in place of rested captain Kieran Read, while his brother Luke stands in for the number eight in the back row.

Ofa Tuungafasi starts in place of Owen Franks at tighthead prop with uncapped Ta’avao, who came into the squad earlier in the championship as injury cover for Joe Moody, named among the replacements.

Shannon Frizell will win his fourth cap at blindside flanker in place of Liam Squire, who has been ruled out for the rest of the championship with a hand injury.

Damian McKenzie returned to New Zealand after a family bereavement forcing one change to a backline that will include Williams for only the second time this year.

Twice World Cup winner Williams injured his shoulder in the third test against France in June after missing the first two with a knee problem.

The 33-year-old slots back in at inside centre with Ryan Crotty moving out to take the number 13 shirt, while TJ Perenara starts at scrumhalf, Waisake Naholo gets a run on the wing and Ben Smith moves to fullback.

New Zealand have not lost two matches in a row since 2011 and Hansen said his team would be well prepared for a confident Pumas side coming off a first win over the Wallabies in Australia for 35 years.

“We’ve picked what we believe is the best team for this particular test match,” he said.

“Argentina are a very good side who have shown they can win both away and at home. They’re full of confidence and self-belief which will make them a very dangerous beast.

“We’ve taken some key learnings from the loss to South Africa, which we look forward to implementing on Saturday.”