Ulster take record defeat on the chin and move on 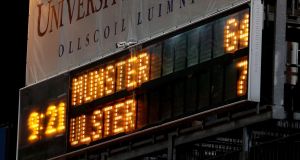 The final scoreboard tells the story of a grim night for Ulster at Thomond Park. Photograph: Dan Sheridan/Inpho

The mid-winter campaign is not here yet but for Ulster this was a not-so-perfect storm. Their two-week, two-game trek to South Africa had left them with a casualty list of 16 players, including a raft of front-liners, and they were as travel weary as they were bedevilled by injury.

To compound all of this, their itinerary had pitched them into a meeting with a strong Munster selection at their Thomond Park citadel and after one of their no-holds-barred weeks of navel contemplation. Then, just to top it all off, they lost Iain Henderson, who failed his HIA, and John Cooney, who had his scalp wound reopened, in the first half.

“No, it was a good test,” maintained Dan McFarland, downplaying the myriad of factors that conspired against him and Ulster. “It was a good challenge. A lot of fellas will be feeling a lot of pain now, including me. Pain is good, you learn from pain.”

Nevertheless, one felt for the recently installed Ulster coach when informed at the outset of his post-match press conference that this constituted a record competitive defeat for the province.

“I didn’t realise that. It’s not good is it? That wasn’t really a question that needed an answer, that was a rhetorical question.”

You’d wonder how much this record defeat will damage the momentum generated by a nine-game unbeaten run going into this game, or maybe it won’t do that much.

Certainly there were a host of mitigating circumstances which would seem to highlight a lack of depth.

“Is that down to depth?” asked McFarland rhetorically. “We have got a lot of young fellas out there. Two new caps, two new starts. There are a lot of guys who would be very experienced in the club who weren’t here today.”

Whether to dissect this horror show in detail with the players or keep the lesson to the coaching staff and refocus on Connacht’s trip to Belfast with a six-day turnaround was, admitted McFarland, “an interesting one”.

Either way, he speculated that Rory Best and Jacob Stockdale would be amongst those returning. “We have got a couple of the senior guys who are coming back in. We will be a lot better next week.”

He also indignantly refuted the idea that Ulster had fielded a weakened team by choice.

“We weren’t doing that. The only person that could have possibly have played that didn’t play was Stuart McCloskey. Everybody else, it was all hands on deck.”

Amid the arrivals and turning of a new page, Ulster had also said farewell to a raft of retirees and departures, including an all-international backline. Thus, while they have the makings of a good team, this was a salient reminder that their squad is a work in progress.

“That was always the case,” admitted McFarland. “Coming in right at the start we all knew that. There was a lot of guys with a lot of experience who retired at the end of last season. Coming in there was always going to be a rebuild process. There were certain things that I was looking for from the squad when we came in and we saw that. But today we were tested and it demonstrated we have got a long way to go.”

Munster know from their own experience how taxing on the body a mini-tour to South Africa can be from their non-show in last season’s Heineken Cup semi-final, which puts the South African sides’ travails into perspective.

“We have got to analyse the stuff around the physical side of things and coming back from South Africa after a five-day turnaround,” said McFarland. “The travel, that’s one thing. I don’t think, in terms of the way we played, tactically I don’t think that was necessarily an issue. The stuff on the pitch I will need 24 hours to have a look at.”