Keith Duggan at the Sportsground 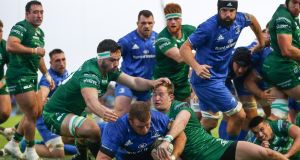 Leinster’s Sean Cronin scores his side’s second try despite the efforts of Connacht’s Paul Boyle and Kieran Marmion at the Sportsground in Galway. Photograph: James Crombie/Inpho

Just before kick-off on Saturday night, Leo Cullen made his way up through the Clan terrace to take his place in the coaches’ box. He cut a distinctive figure in a long blue coat and his presence added to a terrific atmosphere of anticipation and brewing hostility in the stadium.

The 47 points Connacht piled on Leinster last April hadn’t been forgotten by Leinster. Cian Healy’s admission of this during the week was noted with a combination of glee and annoyance by Connacht supporters.

But when the game was over and Leinster satisfied themselves with conceding a miserly three points, Cullen was quick to establish that Leinster sides have never mistaken a visit to the Sportsground for a picnic with champagne.

“Like we have had some unbelievably tough games down here over the years, jeepers, I think of when I played. So we are under no illusions whenever we come here and it was probably heightened a little bit more, the gap in the scoreline last year, 47-10, certainly focused the minds.

“And Connacht have been playing well this season – I know we see teams change every year – but there are lot of similar factors. It is a different type of place to play here, the crowd are into everything, and they make it uncomfortable for teams to come up here, hence the fact they have a pretty good home record.

“There are not many grounds that are like this, it is a very difficult place to come, plus you have the backdrop of some of the players who have been through the Leinster system at some stage so they are highly motivated. We don’t have some of those variables. At Munster next week, there are some of those guys who are in that bracket as well, which is an unusual dynamic for a Leinster-Munster fixture, but . . .”

In a bruising and grimly direct battle of close-up confrontation, Leinster’s defensive solidity just wore the home team down. They were happy to let the home team have as many possessions as they wanted, moving the ball through 20 phases of play on three different occasions without ever really figuring out Leinster’s defensive shape. They were content to tackle and repel all evening until Connacht ran out of ideas.

“We’ve just been looking to be nice and disciplined, Hugh Hogan coming in from a tackle tech point of view, so we are making decent tackles which is important,” Cullen said. “But that’s the system with Stuart [Lancaster] and the work he does. The system was generally pretty good. To be able to manage some of the contacts on our terms, that helps us build the line and make good decisions around the ruck.

“There are so many different components to building a good defensive system that can be effective on the day. We leaked a lot of points here last year, so it was nice we had a better day in terms of our defence. The work in contact areas is huge, ultimately it decides the game more often than not. But still system-wise I thought guys were not quite connecting with each other on a few occasions, so there is still plenty of things for us to get better at.”

Chasing the game after Garry Ringrose’s try in the first minute of the second half, Connacht were increasingly starved of possession and unsure of how to break Leinster down when they did attack.

“Normally the reason you give away those penalties is pressure and that is another compliment to their style and what they did. They put us under pressure and pushed boundaries and we got caught. We talk about it but the only way you learn is to be exposed to it and we were certainly exposed to it today. It’s something we have to work on and be better at the next time.”

The solidity of the performance leaves Leinster in a good place ahead of Munster’s visit to the Aviva next weekend. The hugely physical and energetic influence of Tomane, who tackled everything Connacht with an appetite for destruction, also gives the European champions another dimension as the season sets to deepen into winter.

“Yeah, Joe is improving all the time,” Cullen allowed. “So we see a lot of potential with Joe, even though he is an international player who has played predominantly on the wing for the Wallabies, we are trying to use him in that midfield role because he is a nice target for us.

“He is strong and powerful in the contact, has good distribution skills and is still a work in progress and we can still get him a lot better. The main thing is he has got the appetite to really improve himself, and that was the one thing we were keenest on, namely his desire to come and play for Leinster. It is a work in progress with him.”