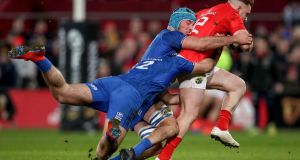 World Rugby’s determination to lower the tackle height through a series of law changes over the past few years is undoubtedly a welcome initiative. The goal is to make the game a little safer for both the tackled player and the tackler, and to reduce injuries and concussion.

The collateral damage in the tackle process of a collision sport can only be sanitised to a point, but there seems to be an understanding amongst players and coaches that better technique benefits all participants in a match environment.

There are a number of phrases that pepper the rugby lexicon when it comes to the tackle; “chop”, “soak” and “dominant” are three examples, the first and third of which are the ones most prized. One Irish player who has excelled in those disciplines is Leinster flanker Will Connors.

The 23-year-old Kildare native’s form this season for his province has drawn the attention of the new Ireland head coach, Andy Farrell. The upshot is that Connors was named in a 45-man squad for a two-day orientation process at the National Sports Campus prior to Christmas.

His performance against Munster in the Guinness Pro14 match last weekend at Thomond Park – 23 tackles, none missed – was a standout figure in a robust Leinster defensive display. He was part of a double hit on Munster replacement Darren O’Shea that proved to be a key moment as the home side pressed for a try in the closing minutes.

Connors’ partner in the tackle was replacement hooker Sean Cronin, who was asked in the aftermath about what made his team-mate so effective in this facet of the game. “I think the difference with Will is that he gets low but it’s his acceleration at the contact point that is probably what sets him apart. The Glasgow game over there, watching on TV, it’s his timing as well; so gets low, his timing is good and then his acceleration to make the hit is something probably that sets him apart.

“He’s had a really impressive year. We have a little stat board inside about dominant tackles throughout the season and I think he’s top of it anyway at the moment. Another really competitive area in the team, so when guys get their chance they have to really take it with the competition that’s there.”

That’s an important consideration: the quality of the tackle is more important than the volume.

Connors has also displayed his strength of character in bouncing back from a couple of injury-ravaged years that included ACL, Achilles, shoulder and hamstring injuries. During his rehabilitation he spent a considerable amount of time with Leinster’s breakdown coach Hugh Hogan, a person to whom he ascribes his improvement in the tackle and ruck aspect of the game.

Ulster’s New Zealand-born Irish international flanker Sean Reidy leads the tackle category (124) in the Pro14 and, when added to his efforts in the Heineken Champions Cup (four matches, three starts), that figure goes up to 160 tackles in 12 matches, 10 in the run-on team.

However, in examining the leading tacklers in each of the four provinces, his tackle rate of 13.33 per game is only good enough for second place. Connors leads the way with 14.85 tackles across his seven matches, all in the Pro14, a figure that would jump to 17.33 if including the nine minutes he was afforded as a replacement against the Dragons.

Gorey native and Connacht flanker Paul Boyle has made 109 tackles in the Pro14 and 126 when factoring in three games in Europe at 11.45 tackles per match. The 22-year-old former Irish age-grade captain, like Reidy and Connors, has been having an excellent season for his province, making steady progress from his days as a teenage number eight, playing under Mike Ruddock at Lansdowne in the All-Ireland League Division 1A.

Jack O’Donoghue enjoyed a super game in Munster’s 13-6 defeat to Leinster, maintaining the high quality of his contributions across 12 matches in all competitions. The 25-year-old, who can play right across the backrow, is Munster’s leading tackler (86) in the Pro14 and that figure increases to 115 in three starts in four Champions Cup games at a rate of 9.58.

His influence, though, permeates more than the tackle stats as he also features in the upper echelons of several other categories in the Pro14, including offloads (nine), lineout steals (three), turnovers won (seven) and carries (78). The twice-capped Irish international will be hoping that he features in Munster head coach Johann van Graan’s plans to start in the province’s crucial Champions Cup game against Racing 92 in Paris.

Connors is the only one of the four players to make the extended Ireland squad and, to be fair, his immediate priority will be to try to get some Champions Cup experience this month – a significant challenge given the form of Josh van der Flier, who in turn has been consistently excellent for Leinster in five matches, four of which were in Europe.

For all four players, the month of January is rich with promise.