The sporting decade that was: the grandest of grand slams 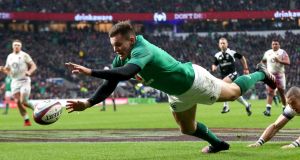 To put the 2018 Grand Slam in context, Ireland had only ever completed two of them before – in 1948 and 2009. Nor could the finale have been set up much better – against outgoing back-to-back champions England at Twickenham on St Patrick’s Day.

Ever since that 41-phase drive which led to Johnny Sexton’s match-winning drop-goal in Paris, it felt as if destiny had called this Irish team, and the ensuing wins over Italy, Wales and then Scotland had secured the Six Nations title a week beforehand.

Whereas Joe Schmidt made one change, restoring Iain Henderson to the starting line-up, Eddie Jones made seven, and two positional switches, and England – after successive defeats by Scotland and France – had begun to look weary.

For the sun-drenched captains runs of the day before - it had been T-shirt weather - come the snowy Saturday it was truly Baltic. The number of Irish supporters were three or four times the official allocation of 5,000.

Save for that endgame in Paris, Ireland had been efficient front-runners, and so it was here, as all three first-half tries went to the TMO. Garry Ringrose pounced for the first inside five minutes when Sexton’s on-the-money up-and-under came down on Anthony Watson with snow and Rob Kearney on it.

A sweetly executed strike move saw Tadhg Furlong’s pirouette and deft transfer put Bundee Aki through for his try-scoring pass inside to the supporting CJ Stander. Conor Murray’s blindside draw-and-give put Jacob Stockdale away for a trademark chip-and-touchdown for his seventh try of the tournament.

“It’s hard for it not to be the high point, because right here, right now, it’s a little bit of history for us,” said Schmidt afterwards. “We started this a calendar year ago in the last round of the Six Nations. It’s a really neat story of a year that has managed to see us win every game that we played which is incredibly special.”