Rugby Statistics: It’s time for change as Farrell puts his own shape on things

There is an average 5.4 selection changes between the final game of an Irish coach and the opener of his successor 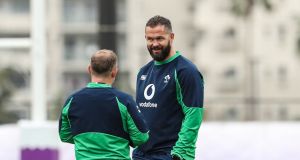 Ireland’s Andy Farrell at training in Tokyo during the Rugby World Cup. His first match as Ireland’s head coach is a Six Nations Championship game against Scotland at the Aviva stadium on February, 1st. Photograph: Billy Stickland/Inpho

Andy Farrell’s 45-man squad, his first as the new Ireland coach in succeeding Joe Schmidt, offers a selection of the old and the new, many borrowed from the previous regime, and the majority once again blue.

Ascending from defence to head coach, Farrell will put his own shape on not just the team and their playing patterns but also in rejigging the coaching team. John Fogarty and Mike Catt join the group, while, according to reports, Simon Easterby will switch from forwards’ coach to defence.

From a playing personnel perspective only two players, Rob Kearney and Rory Best, from the Ireland team that started the World Cup quarter-final defeat to New Zealand, have not been included in the extended squad. Best, the captain in that match, has retired, while Kearney has been squeezed out.

Farrell’s first match is a Six Nations Championship game against Scotland at the Aviva stadium on Saturday, February, 1st.

Based on an admittedly rather narrow evaluation of previous Irish coaching tickets dating back to Brian Ashton’s last game in charge and the first for Warren Gatland,there has been an average of 5.4 changes to selection between the final game of the outgoing coach and opening international for his successor.

Ashton’s swansong as Ireland coach was a 17-16 defeat to Scotland at Lansdowne Road in the opening game of the 1998 Five Nations, prompting one of the more colourful quotes in the aftermath when he said: “I don’t know whose gameplan that was but it was nothing to do with me.”

He had been appointed on a six-year contract in 1997, and was gone in 12 months, realising that it was an environment in which he could not function.

As an aside the team for his last international contained just three players, wing Denis Hickie (St Mary’s College), scrumhalf Brian O’Meara (Cork Constitution) and prop Reggie Corrigan (Greystones) who were playing club rugby in Ireland at the time; 12 were English-based.

Ashton resigned – Ireland did not have a match in the second round of fixtures – so Gatland’s first game in charge was a trip to Paris. He made five changes for the match, bringing in Rob Henderson (London Irish), Eric Elwood (Galwegians), Conor McGuinness (St Mary’s), Andy Ward (Ballinahinch) and Victor Costello (St Mary’s).

Ireland produced a wonderfully spirited performance against a France team that would go on to win a Grand Slam. Denis Hickie became the first Irishman to score a try in Paris since Freddie McLennan managed the feat 18 years previously.

Gatland’s reign lasted until the final game of the 2001 Six Nations, a match played in October because of the foot-and-mouth crisis. He is the only one of Ireland’s last five head coaches to win his final game before being replaced; a brilliant Keith Wood-inspired victory over Clive Woodward’s Grand Slam-chasing England at Lansdowne Road.

His successor, Eddie O’Sullivan, previously Gatland’s assistant, took over for the opening game of the 2002 Six Nations, making a modest four changes from the English match, Geordan Murphy, Frankie Sheahan, Paul O’Connell (a try-scoring debut) and Simon Easterby started in a 54-10 win over the Graham Henry-coached Wales; a record score for the fixture as Ireland ran in six tries.

O’Sullivan’s tenure came to an end six years later following a 33-10 defeat to England at Twickenham in the final match of the 2008 Six Nations and as he had done he was succeeded by an assistant coach, Declan Kidney.

The latter’s first official game in charge, excluding the summer tour to New Zealand and Australia of that year, was a game against Canada at Thomond Park in November.

Kidney made seven changes from the team that O’Sullivan had chosen for Twickenham. Keith Earls scored a try on debut, Brian O’Driscoll and Luke Fitzgerald formed a new centre partnership, Jerry Flannery and Tony Buckley were named in the frontrow, while man-of-the-match Stephen Ferris and Shane Jennings were included in the backrow.

To put some of those changes in context, Rory Best, John Hayes, David Wallace and Girvan Dempsey returned for the next game against New Zealand. Kidney’s final game was a 22-15 defeat to Italy at the Stadio Olimpico on the last weekend of the 2013 Six Nations.

Schmidt’s first official Test as head coach came the following November, a 40-9 victory over Samoa. Les Kiss had taken charge of the summer tour to the USA and Canada.

The New Zealander made six changes to the team that had lost to Italy – Tommy Bowe, Gordon D’Arcy, Fergus McFadden, Jack McGrath (on debut), Devin Toner and Chris Henry were introduced – albeit it should be pointed out that captain Paul O’Connell, Cian Healy, Sean O’Brien, Eoin Reddan, Johnny Sexton and Luke Marshall returned the following week for the game against Australia.

So with Best retired, Kearney omitted and Johnny Sexton currently injured and other players in and out of form, Farrell’s first team is likely to follow the familiar pattern of his predecessors. The under/over is five.