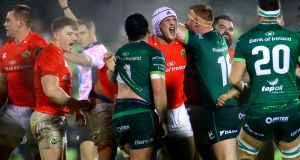 The Sportsground has become a special place in recent times, practically unrecognisable from times past. Connacht have engendered pride, belief and ambition amongst their support base like never before, all of which merely made this misfiring defeat all the more disappointing.

This was only Connacht’s second defeat in their last dozen competitive games at the Sportsground dating back to a 31-24 loss against Munster in early January. But no less than that defeat, the two since have hurt particularly, be it the chastening 42-11 thumping by all-conquering Leinster in early November or this one in front of an expanded and expectant Sportsground full house last Saturday night.

The pain was etched on Andy Friend’s brow as the Connacht head coach readily admitted as much.

“We call this our fortress. We want to be winning games here, and you want to be sending the great support we got here with smiles on their faces for Christmas, but that wasn’t to be there tonight.

“That hurts more. When you sit there in the shed and you know you didn’t deliver your best, that’s what really hurts you.

“If we’d played our best footy and Munster had been good enough to beat us, well good on them, but we didn’t play our best footy.”

The vast majority of the 8,129 crowd were there to roar on Connacht to a much coveted win over their southern rivals and so usurp them atop Conference B. Yet for all the perceived injustices at the hands of Andrew Brace and his officials in the Clan Terrace, the home side were simply too error-prone.

The rain having passed on a relatively still and misty night, conditions were set fair for Connacht to continue playing the high tempo brand of running rugby which helped to produce last week’s remarkable feat of escapology against Gloucester.

Perhaps they wanted it too much, for this was a sixth defeat in their last seven meetings with Munster. They created plenty of platforms for themselves, and made both more line breaks (9-6) and beat more defenders (18-14).

Bundee Aki strained every sinew in breaking tackles and winning turnovers, while they worked their wingers Kyle Godwin and the eye-catching Aussie John Porch into space. Yet the regularity with which they released the pressure valve on Munster with turnovers or penalties was, alas, the most consistent aspect of their performance.

Connacht also did not receive restarts well, and especially in the first half conceded soft three pointers whenever the men in red visited the home 22.

Munster, while largely shelving their ambition of late with a much-changed side, retained possession better, and also played territory through the kicking game of impressive 20-year-old debutant scrum-half Craig Casey and his half-back partner JJ Hanrahan.

The latter landed all his kicks and kept pinning Connacht back, a prime example being the kick from which Conor Fitzgerald conceded an attacking line-out which led to the Munster pack pounding the line for a critical try by Jack O’Donoghue.

O’Donoghue, a late call-up last week and an early replacement here, remains curiously out of the international picture, but like Munster’s other big men – CJ Stander, Jean Kleyn, Billy Holland and Chris Farrell – had a big game.

This was straight out of the Munster away-day manual, win the collisions and play cuter. Whereas it sets them up for next Saturday’s marquee fixture with Leinster at Thomond Park and the ensuing trek to Belfast, Connacht have to factor in Christmas into a six-day turnaround before facing Ulster in Belfast, followed by a trek to the RDS on Saturday week.

Yet Friend said this defeat would not change their approach to the next two games in any way.

“Every one of them is one we want try and win. I always say that and I mean that, but we just said there in the shed, we’ve got a six-day turnaround to get up to Belfast, and I think we were the last team to beat Ulster in the Kingspan, and we’ll hopefully be the next team to beat Ulster – that’s our intention.”

Not that the occasion and the game was not entirely without positives for Connacht. Aside from more evidence that they are worthy of a new, bigger stadium, results elsewhere – Glasgow and the Dragons beating Edinburgh and the Scarlets – combined with a late bonus point combined to keep them in second place in Conference B.

Furthermore, that bonus point came courtesy of a try by Jack Carty, the high point of a very positive last quarter cameo off the bench by the out-half.

The 27-year-old’s confidence has ebbed since coming back from the World Cup, so much so that Friend felt moved to displace Carty with Conor Fitzgerald. Few would have cherished a win over the men in red more than their 22-year-old former Munster under-age and academy player, and he had some good moments, but he was perhaps guilty of playing too much rugby in their own territory.

Carty’s season reached a nadir when he was one of the more notable omissions from the 45 players named for Monday’s Irish mid-season “stocktake”. As he warmed up Carty had a clear look of intent in his eyes. As well as feeling he had nothing to lose, perhaps Carty also felt liberated by the 19-9 deficit Connacht faced.

In any event, he began finding space in the Munster backfield with his kicking game, and although he had plenty to do when the Connacht back mauled infield to create a big blindside for Caolin Blade, Carty backed himself in dummying to Porch and scoring himself.

Friend accepted that he might “possibly” have introduced Carty earlier, before going on to say: “I thought Jack was great. I thought Conor did some good things too. We know we’ve got Conor in for the next two weeks now.

“What was really pleasing is that’s Jack Carty, that’s what we saw last year. It does take players time to find their mojo and to find their form. I’m sure Jack’s probably thinking now ‘I wish I didn’t have a two-week break, but he’ll need that as well. He’s had a really long 18 months to be honest, but I know now… he’ll be disappointed for the team but there’ll be a little part of him of saying ‘right, I think I’m back’ and he’ll be busting to get back.”

Every team needs their main man at out-half firing. So, if nothing else, Jack’s back.