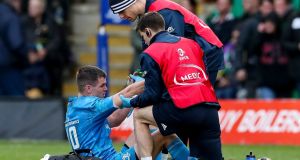 Johnny Sexton sustained the knee injury in the first game against the Northampton Saints and was withdrawn shortly after half-time at Franklin’s Gardens. Photograph: Billy Stickland/Inpho

The date of Johnny Sexton’s potential return to Leinster colours is still unknown despite the fact that “his rehabilitation from a knee injury is going well” according to a medical update from Leinster.

The outhalf will see the specialist later this week after which a more definitive timeline on his return to action should be available.

Sexton sustained the knee injury in the first game against the Northampton Saints and was withdrawn shortly after half-time. The medical prognosis at the time was that he could be fit for the start of Ireland’s Six Nations campaign.

Leinster forwards’ coach Robin McBryde explained: “Well he [Sexton] seems in a good Christmas spirit. He’s in a positive mind frame. When you talk to him, he’s not down in the dumps or dragging himself around here. He’s an energiser, he still contributes to meetings.

“When you’ve got an injury, I think mentally you’ve got to be in a good place, first of all, and that is reflected in your demeanour. If that’s part of his progression, then he’s progressing well.”

McBryde confirmed that Sexton has no problem with a more pastoral role when he is not available to play, specifically in the case of young pivots like Harry Byrne and Ciaran Frawley.

“You’re constantly looking for good peers within the group who can develop the young players coming through. The best players are always the ones who are going to do that without fear of [putting] any pressure on themselves . And Johnny definitely falls in that category.”

Centre Rory O’Loughlin has had a procedure on a shoulder injury and will be sidelined for 12 weeks while prop Michael Bent picked up a calf injury in training.

Jamison Gibson-Park who withdrew on the day of the Munster match through illness has recovered and will take a full part in training this week ahead of the Guinness Pro14 game against Connacht at the RDS on Saturday (5.30).

Joe Tomane returned to full training having recovered from a hamstring injury but hooker Ronan Kelleher (hand) remains an absentee.