Rugby stats: Numbers add up for the positive impact of Sevens 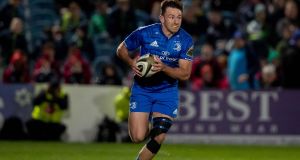 Leinster fullback Hugo Keenan was a valued member of the Ireland Sevens team, particularly in 2017 and 2018. Photograph: Morgan Treacy/Inpho

When the IRFU appointed Anthony Eddy at director of Women’s and Sevens rugby in December 2014, amongst the goals was to get the Irish Men’s and Women’s Sevens teams competing at World Series level, an ambition that has now been realised after the men’s squad managed to match the achievement of the women’s group.

There were initial misgivings voiced in some quarters about where the Sevens culture fit into the Irish rugby framework and whether it would have a knock-on benefit to its 15-a-side sibling, but those concerns now appear redundant based on the evidence of the overlap in personnel terms between the two codes.

Most of the top countries use Sevens to facilitate the skills development of specifically chosen young players who spend a season or two in the abbreviated game before returning to 15s, a pathway that is now working smoothly from an Irish perspective too.

Leinster fullback Hugo Keenan, Munster wing Shane Daly, and Ulster wing Robert Baloucoune were valued members of the Ireland Sevens team particularly in 2017 and 2018, but by the time they returned to their provinces on a full-time basis, their development as players was appreciable.

The IRFU only awards Sevens caps for certain tournaments – Ireland were an invitational side at a couple of World Series events earlier this year, World Cup qualifiers and Rugby Europe events are the other competitions for which caps are awarded – but Keenan (12) and Daly (eight), both of whom also played for the national Sevens side in 2019, and Baloucoune (six) contributed handsomely.

Keenan, 23, who can play fullback and wing, was a member of the Ireland team that reached the Under-20 World Cup final in 2016 – a squad that included senior internationals Jacob Stockdale, Andrew Porter and James Ryan amongst others – went on to make his Leinster senior debut in November of that year; an eight-minute cameo as a replacement against Zebre. His next cap for Leinster was again from the bench in November, 2017, partially explained by his secondment to the Ireland Sevens team with whom he played 10 tournaments in 2017 and 2018. He made three appearances for Leinster in November/December 2018 but returned to the province for the start of this season.

In the absence of the Ireland squad members he made four starts in five appearances in the Pro14 and was a standout player. His balance, footwork, speed, lines of running and vision have seen the former Mount Merrion Boys’ soccer player standout amongst his peers and but for an ankle injury he would have been pressing strongly for a first start in Europe based on current form.

Daly, a talented all-rounder who played Gaelic football for Bishopstown and soccer for College Corinthians before settling on rugby during his SCT years in Pres Cork, was a teammate of Keenan’s on that Ireland U-20 team that lost the World Cup final to England at the AJ Bell stadium.

He made his Munster senior debut in November, 2017 against the Glasgow Warriors, but spent most of 2018 with the Irish Sevens squad, playing in seven tournaments. Daly can play right along the backline something he demonstrated last season in six Pro14 appearances, starting at fullback, wing and centre. He’s another young man with a prodigious skill-set, to complement the power of his six foot, three inch frame.

The 22-year-old Corkman has a good kicking game too and there’s little doubt that some of the polish obvious in his attacking game came from his time with the Sevens. He’s a superb prospect if he continues his evolution as a player.

Enniskillen native, Baloucoune, another excellent prospect is the only one of three players to have already made his debut in the Heineken Champions Cup, a milestone he achieved in January 2019 when he played against Racing 92 and the Leicester Tigers, scoring a try in each of those two matches.

The 22-year-old, six foot four inch wing, played 13 matches for Ulster last season, but has managed just a single appearance this season, as a replacement against Munster, because of injury. He should make Ulster’s matchday squad for Friday night’s Champions Cup game against Clermont Auvergne at the Kingspan stadium.

This is by no means an exhaustive list as there are plenty more examples of players who have spent time in the Sevens programme before returning to their provinces but Keenan, Daly and Baloucoune are the latest to defy the argument that Sevens and 15s rugby are mutually exclusive pathways in development talented young players.

1 Gordon D'Arcy: I know what Joe and Cheika would do. Fix the basics
2 Darragh Ó Sé: Cork and Donegal went out with the wrong attitude
3 Simon Easterby admits Ireland may need to take new line on maul
4 Sean Moran: Bloody Sunday centenary weekend will live long in the sporting memory
5 Can Solskjaer’s Man United find their groove when it matters?
Real news has value SUBSCRIBE