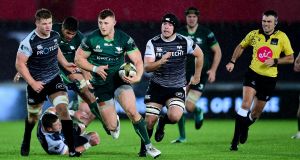 Victories in Wales for Connacht are rare enough, particularly at Liberty Stadium, so it may not surprise the last time Connacht recorded a victory over Ospreys in Swansea was also in a World Cup year.

Add to that Connacht’s record of winning four of their five opening games, and it was 2015/16 when Connacht produced their most successful season which they crowned with a first title.

Coach Andy Friend will certainly hope those portents are good for the season ahead after they ground out a fourth successive win on Saturday evening. Add in Pro14 debuts for two frontrow players, Jonny Murphy and Conor Kenny, and Friend is delighted Connacht sit just a point behind Munster at the top of the Pro14 Conference B table.

“With about 10 minutes to go, we looked at that frontrow, Matt Burke, Jonny Murphy, and Conor Kenny, and that was the Eagles frontrow, and sitting behind them was Cillian Gallagher, who was the Eagles lock,” said Friend.

“So we have depth now and I thought those men were brilliant. To turn up to Liberty Stadium and get the win with those injuries is really pleasing.”

While Connacht have racked up a host of injuries in the pack, the Ospreys will point to the loss of some 19 players - eight on World Cup duty - but it is all about the growing maturity for Friend’s squad and lessons learned.

“It wasn’t pleasant out there - very similar to that Scarlets game - and I had to take responsibility for that because we probably gave the wrong game plan. So since that game, there have been a lot of learnings.

“Young Conor Fitzgerald is very smart, the back field was helping him, the nines were helping him, and I just thought we turned them at appropriate times and kept the ball in front of our forwards, and it was much better than opening night against Scarlets.”

Right wing Niyi Adeolokun capitalised on slick handling before kicking ahead and winning the race to touch down for the first try, which Fitzgerald converted before tacking on a penalty after 17 minutes.

When flanker Dan Lydiate was yellow carded, Connacht took advantage. From a five metre scrum, number eight Paul Boyle found space to supply centre and man of the match Peter Robb, whose direct charge to the line could not be stopped. Conor Fitzgerald added the extras to push Connacht into a 17-3 lead.

The home staged a second-half comeback when hooker Sam Parry touched down from a forward drive which James Hook converted, but Fitzgerald had the last say with a second penalty.

Manchester City go 15 points clear; Gordon D’Arcy on what we can learn from Italy win 07:36
Gordon D’Arcy: Ireland merely picked through the carcass of Italian rugby 06:00
Munster looking to drive home their advantage on Thomond Park run-in 06:00
Brian O'Connor: Elliott revelations leave racing’s good name in state of disrepute 06:00
For a young one obsessed with football, Gregory’s Girl was heaven 06:00
Here is your handy guide to sport on television this week