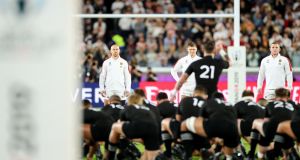 New Zealanders have expressed disappointment at the decision to fine England for their v-shaped formation for the All Blacks haka in their Rugby World Cup semi-final, with many fans praising them for their dignity and dramatic flair.

On Saturday night, England delighted fans in both camps when players arranged themselves to face the All Blacks. The V – which many inside New Zealand took to stand for “victory” – was widely praised by New Zealanders, many of whom commented on the dignified and low-key response of the English side to what can be a confronting and emotional experience.

Numerous haka experts in New Zealand have attested that England’s move to confront the haka was in no way offensive to the All Blacks side, and did not violate Maori cultural protocol, known as tikanga.

The All Blacks themselves dismissed the significance of the incident at the time, with their scrumhalf Aaron Smith also revealing English captain Owen Farrell was winking at him during the performance.

However, World Rugby regulations state opponents must not cross the halfway line while the Maori war dance is being performed and six England players could be seen in breach of that rule.

It is believed England have been fined a four-figure sum but less than the £2,500 France had to pay when they adopted a similar formation before the 2011 World Cup final. On that occasion, almost all of the squad advanced beyond the halfway line.

Tapeta Wehi, a haka expert from Rotorua in the North Island, praised the English side’s bold move and said he wished more teams would respond to the haka with such panache.

Wehi said the haka was widely misunderstood and was intended as a challenge to the opponents – and any side that met the challenge deserved respect – not a fine. “A haka is laying down the challenge and they were challenging the All Blacks back – so no problem with that,” he said.

“It’s a regulation problem about whether they were allowed to cross that line but that’s got nothing to do with our culture. Whatever England did, that’s what it’s all about. The Irish did it too, that was great. For me it’s all good, no problem at all.”

“Most Maori love it when the challenge is met – I love it,” said Wehi. “People have to understand more what the haka is about. People think what they are doing is disrespectful. But if you ask Maori, they’ll tell you that’s what it’s all about. It’s laying a challenge and if the other team want to challenge you back – then it’s all good. That’s what it is all about.”

On Thursday many New Zealanders expressed their disappointment in the fine issued to England, saying it was nit-picking and unfair, with one senior New Zealand Herald editor slamming it as “utterly ridiculous”. – Guardian