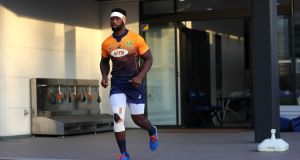 The beers are on ice, the traditional spiced sausages bought, the barbecue coals stacked, and government advisories on the rules of the game circulated on social media.

“Of course I’m watching. I’ll be at home, with friends and my husband. It’s a big day for us … for all South Africans,” said Adelaide Mahlangu, 25, a grocery manager in Johannesburg.

When Siya Kolisi leads 14 other players on to the pitch at Yokohama’s International Stadium on Saturday, many will be thinking of another South African captain who led the national team in the Rugby World Cup 24 years ago.

The moment when Francois Pienaar received the Webb Ellis cup from Nelson Mandela, the Nobel peace prize-winner and South Africa’s then president, symbolised a new and hopeful future for a country shattered by decades of rule by a repressive, racist apartheid regime.

Now, many in the rainbow nation are hoping that the Springboks can win again, and give a similar boost to their troubled and disillusioned country.

“Everyone is desperate for a victory here, perhaps even more so than in 1995. People are so desperate for some good news. Defeat might feel like another body blow,” said Daniel Mallan, a South African sports journalist.

There has been much progress since the dark days of apartheid, but South Africa remains one of the most unequal countries in the world, with disproportionate wealth in the hands of the white minority. Violent crime is a serious problem, with poor people most likely to be victims. There is deep public frustration with soaring joblessness, patchy delivery of basic services and widespread corruption.

Many of the new hopes are now focused on Kolisi, the Springboks’ first non-white captain.

“If the team was captained by a white guy, we wouldn’t even be talking about how this [match] would reunite the country but because he’s a black guy in a shirt that has meant so many different things at so many different times … his story is a microcosm of the positivity of new South Africa,” said Mallan.

The history of rugby in South Africa – described as “the sporting embodiment of white minority rule” – touches many of the most sensitive issues in a nation where historic grievances are still powerful.

Harsh restrictions on non-white players under apartheid led to international bans and South Africa was excluded from the first two Rugby World Cups. In 1995, the team that Pienaar led to victory in the final included just one black player. In 2007, when South Africa won again, there were two.

On Saturday, the team’s coach, Rassie Erasmus, is set to field a team with at least seven black players, possibly more. He has described his squad as a celebration of “so many different cultures, players, languages”. None of his players are old enough to clearly remember the apartheid era and several were born after it ended.

“The Boks have more supporters now than when Mandela was alive,” said Sylvester Clinton, an unemployed resident of Bonteheuwel, near Cape Town.

Like many of his compatriots, Clinton, 47, sees Kolisi’s astonishing career as evidence of the ongoing transformation of South Africa.

Kolisi grew up in deep poverty but was spotted by scouts and won a rugby scholarship to a prestigious school with a record of producing sporting stars. In 2007 he could not afford a television and watched the World Cup in a pub in the poor township in Eastern Cape province where he grew up. Married to a white woman, Kolisi has two mixed-race children and has legally adopted his two half siblings.

“I don’t shy away from where I have come from and I’m aware that my story is a typical South African story in some ways. It’s my motivation,” Kolisi, 28, said last year . “I tell my team-mates that you should never play just to represent one group. You can’t play to be the best black player or to be the best white player to appeal to a community; you have to play to be the best for every South African. We represent something much bigger than we can imagine.”

Kolisi’s appointment as captain prompted Desmond Tutu, one of the best known and loved leaders of the struggle against apartheid, to praise “a wonderful achievement that … speaks to the hope we felt 24 years ago that we were developing a special society in which the cream would rise to the top regardless of colour or class.”

But recent weeks have been marred by rows over alleged racism – one involving Kolisi’s friend and teammate Eben Etzebeth which has led to an investigation by the South African Human Rights Commission – and the example of Kolisi has been criticised as misleading by some prominent commentators.

“The inspirational message is that excellence and flourishing are possible end-goals within anyone’s reach regardless of the circumstances of your early childhood … That’s a seductive lie,” wrote Eusebius McKaiser, a well-known radio presenter.

Ralph Mathegka, a political commentator, said South Africa was “so divided and so cynical” that any relief from a victory would only be temporary, noting that where once criticism of black players came from conservative voices within the white community, particularly those angered by quotas designed to increased diversity in the squad, it now came from those who saw them as “selling out”.

Yet the interest in the sport and the support for the Springboks is difficult to ignore. Once it would have been almost inconceivable that any one in Gugelethu, a poor township on the outskirts of Cape Town, would turn out to cheer on the national side.

On Saturday, Siyabulela Villem, a security guard, will be watching the game with many other residents.

“When Kolisi was made captain I felt proud, but I was even prouder when he led the team to the final,” the 39-year-old said. “The Boks are representative of all of us now.”