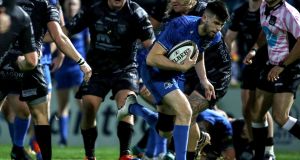 Leinster outhalf Harry Byrne scores a try during the Guinness Pro 14 game against the Dragons at the RDS. Photograph: Dan Sheridan/Inpho

Harry Byrne amassed a personal haul of 15 points at the RDS as Leinster cruised to a convincing bonus-point triumph over Dragons and keep up their unbeaten start in the Guinness Pro 14.

Leo Cullen’s side registered eight tries over the course of the action with wingers Dave Kearney and James Lowe both bagging braces for the rampant champions. This result means Leinster are still the only unbeaten side in the competition and have now opened up a five-point gap at the summit of the Conference A table.

In addition to Byrne and Ryan Baird – Grand Slam winners during the spring with the Ireland U20s – making their first starts, Jack Aungier was introduced off the bench for his Leinster debut.

After failing to cross the whitewash in last Saturday’s drab affair in Zebre, there was just nine minutes on the clock when Leinster pounced for the opening try of the night.

A regular starter this season in the absence of Tadhg Furlong and Andrew Porter, former Ireland international Michael Bent rounded off a lineout maul with a powerful close-range finish.

Byrne’s conversion drifted past the target and courtesy of some handling errors in possession, they briefly handed the initiative to Dean Ryan’s Dragons. The visitors manufactured a penalty and outhalf Sam Davies made no mistake with his first kick at goal.

Nevertheless, Leinster were gradually rediscovering their attacking groove and their second try inevitably arrived on 22 minutes. Following initial approach work from Byrne and Rory O’Loughlin, the quick hands of Scott Penny released Kearney for a clinical run over the line.

Byrne superbly added the conversion to give the hosts a nine-point cushion, but Dragons once again responded at the opposite end. When the ball broke free into his path, fullback Jordan Williams was left with a simple touchdown in the left corner.

This was only a minor speed bump for the holders, though, who subsequently ended the half in fine style.

Another prolonged attack found its way towards Byrne and he burst through a gap for his second try of the campaign. He supplemented this effort with another conversion to give Leinster a 19-8 buffer at the interval.

Given how impressive Dragons were in dismissing the challenge of Glasgow Warriors last weekend, the Blues had reason to be wary of a potential backlash. However, the exact opposite proved to be the case.

Within four minutes of the resumption, Ronan Kelleher dotted down off the back of another incisive lineout maul, securing the bonus point, and also serving to enhance the growing reputation of the 21-year-old hooker.

He claimed a hat-trick in last month’s facile home victory over the Ospreys. Kearney matched this feat in the opening round success at the expense of Benetton and he jinked through for his second try of the night on 47 minutes.

Though this effectively ended the game as a contest, there was little prospect of Leinster easing off in the closing stages. Dragons managed to hold out for a sustained period, only for their superior opponents to once again thrown off the shackles in spectacular fashion.

Either side of Hugh O’Sullivan’s maiden try at the professional grade, the elusive Lowe crossed over to cap another accomplished display on the left wing. Byrne supplemented all three of these scores with conversions and was later announced as man of the match on a blustery evening in Ballsbridge.

A resolute Dragons bagged a consolation score at the death through winger Owen Jenkins, but it wasn’t enough to dampen the spirits of the Leinster faithful.