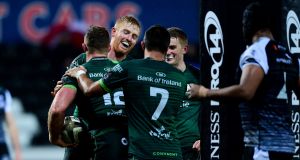 Connacht maintained their winning momentum when grabbing a hard-earned win against the Ospreys at Liberty Stadium on Saturday afternoon.

After three bonus point wins, Connacht went into this contest with confidence, but in miserable conditions, they were forced to dig deep for victory - their first at Liberty Stadium since their Pro12 winning title year, and their fourth in 16 years against the Swansea outfit.

Connacht can thank a solid first half for this win, having enjoyed a 17-3 lead after taking control of both territory and possession for the opening 40 minutes.

Despite an early Ospreys penalty kick from outhalf Luke Price, Connacht grabbed the initiative, responding almost immediately with a try from Niyi Adeolokun.

Having marked his first start of the season last weekend with a try, Adeolokun capitalised on some slick handling before kicking ahead and winning the race to touch down, with outhalf Conor Fitzgerald converting. He tacked on a penalty after 17 minutes to keep Connacht on the front foot, and when Ospreys had conceded one penalty too many, flanker Dan Lydiate was yellow-carded and Connacht took advantage.

From a five metre scrum, number eight Paul Boyle found space to supply centre and man of the match Peter Robb, who gave his opponents no chance with his direct charge to the line. Conor Fitzgerald added the extras to push Connacht into a 17-3 lead.

The home staged a second-half comeback when veteran James Hook introduced to steer the Swansea side. In the 55th minute the home side struck for their first try when hooker Sam Parry touched down from a forward drive, following a penalty to touch. Hook added the conversion to narrow the gap to seven points, but Fitzgerald was able to tack on a penalty five minutes later to restore the 10 point lead.

1 Trump in the rough over playing golf and US Covid-19 fatalities
2 Awarding of 2023 Rugby World Cup to France part of Laporte investigation
3 Suarez’ Italian language exam rigged according to prosecutors
4 What next for green jersey hero Sam Bennett after toughest of Tours?
5 Gerry Thornley: Talk of Anglo-French hegemony is over the top
Real news has value SUBSCRIBE

Donegal SFC final postponed until October 7th over coronavirus concerns 18:28
Trump in the rough over playing golf and US Covid-19 fatalities 18:12
Tottenham’s Carabao Cup tie at Leyton Orient off but no decision on walkover 17:45
Digital passport system could ensure horse movements if Brexit deal agreed 15:45
Awarding of 2023 Rugby World Cup to France part of Laporte investigation 16:12
Here is your handy guide to sport on television this week