England’s Itoje has it all, a wrecking ball with lightning pace 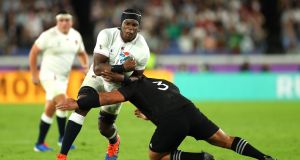 Last Monday, Maro Itoje turned 25. That’s almost worth repeating several times for he has already won more than the vast majority of players, even legends of the game, have won in entire careers.

He has won an under-20 World Championship with England (when co-captain after being Man of the Tournament in their Six Nations title success), four Premiership titles, three Champions Cups, two Six Nations’ titles (including a Grand Slam) and a drawn Lions series in New Zealand.

Used as a replacement in the losing first test, Itoje’s promotion to the team was one of the major factors in the Lions’ winning the second test and drawing the third.

Ala Waltzing O’Driscoll in 2001, that tour also gave birth to the “Oh Maro Itoje” chant, sung along to the track Seven Nation Army by the White Stripes.

It was heard again last week during his sensational man of the match performance against the All Blacks, and come Sunday evening, depending on the outcome of the final, Itoje could have a World Cup winners’ medal and the World Player of the Year statuette to compliment his European Player of the Year award in 2016.

And, yes, Maro Itoje only turned 25 this week.

First and foremost, he is something of a freak, and as Kenny Everett was wont to say, that’s meant in the best possible taste. At 6ft 5in (1.95m) and 18st 2lb (115kg), Itoje is a wrecking ball but also extraordinarily athletic, with the pace and mobility to play with equal facility in the back row.

As he showed once more against the All Blacks, he is explosive in contact on both sides of the ball. He can play in the thick of the close-in traffic or in the tramlines.

He is brilliant in the air, both at lineouts and restarts, and with his octopus-like arms twice came through All Blacks’ mauls and likewise at the breakdown.

In terms of forward play there is nothing he can’t do, and if there was a downside to his game it was his penchant for giving away penalties. This was compounded by a reputation for sledging on the pitch, and a less than endearing habit of mockingly patting opponents on the head, such as to a cluster of Glasgow players when their maul went over the Saracens line last January after the whistle had gone.

After that Lions tour and all those early achievements with Saracens and England, his successes seemed to go to his head. Itoje is probably one of those players who, more than most, is adored by his own fans and disliked by opposition supporters.

However, he has definitely tempered this less attractive aspect to his on-field persona this past year. In subsequent dealings with journalists, which he became weary of during the Lions tour, Itoje has come across as confident, sophisticated and cool, and very aware of his background.

In large part this is because he seems happier talking about things other than rugby for he is also very bright, well educated and interesting.

His parents, Efe and Florence, were born in Nigeria and came to England to continue their education. They married and settled in Camden. Their three children, Jeremy, Maro and Isabel, were raised in the Nigerian way.

“We ate Nigerian food and adhered to values that were more Nigerian than British,” Itoje said in an interview with the Sunday Times in January 2017.

He also explained that the Nigerian way is to be respectful to one’s parents and older people, so at the insistence of his father Itoje completed his final two years of school at Harrow School, a state boarding school in Harpenden, Hertfordshire.

He played a variety of sports, including basketball, football, and athletics, representing England at u-17 level in shot putt, but excelled at rugby with Harpenden RFC and Old Albanian RFC, before joining Saracens, making his debut at 19.

A straight A student at school, he also studied for a politics degree at the School of Oriental and African Studies in London, which had to be extended due to his rugby commitments before finishing it in 2017.

“My parents believed education had to come first. Playing rugby was a privilege that could be withdrawn if my grades dropped. When the offer came to join the Saracens academy they supported me, but felt I should continue my education. They were pretty insistent that I do a degree, and it should be at a top university.”

He lives with his brother Jeremy in Mill Hill, not far from Allianz Park, and says he enjoys his own space, not least when driving to training as it allows him to listen to his latest audiobook, which at the time was Dreams From My Father [Barack Obama’s memoir].

“Audiobooks are better when it’s the author reading and this is the case with this one,” he said.

Itoje also revealed he is an unapologetic Remainer, and not even England’s tour to Australian during the EU referendum could prevent him voting.

“Before I left I signed up for a proxy vote. So I asked my kid sister Isabel to do it. I voted Remain and Isabel was voting the same, so I chose her because I knew she wouldn’t sabotage it,” he said, laughing at his refusal to trust anyone who was going to vote Leave.

“My political persuasion is centre-left, so I have a natural leaning towards that side of things,” he told the Guardian in an interview in March this year.

He also likes the writing of Afua Hirsch and Simon Sinek, and West End shows. “I love Les Misérables!”

As a keen football fan during this World Cup Itoje spoke out against the racist abuse which England footballers were subjected to in a Euro 2020 qualifier in Sofia.

“It’s just appalling, it’s abysmal. You would think they wouldn’t have to go through that. It sends a poor message about the game of football…it’s a shame because it’s such a beautiful game, and it’s being tarred by people with racist thoughts and racist minds.”

Itoje stressed the need for football to take a tougher stand. “Punishment needs to be more severe because it is not acting as a deterrent.”

He also warned rugby of the need to be more vigilant.

“I know people in rugby who have experienced it in the professional game – not necessarily in the Premiership but playing in different parts of the world – and grassroots. In rugby you don’t have microphones everywhere so it’s hard to prove.”

“I think rugby is probably, from the sports I’ve seen, right up there in terms of integrity, respect and how they treat people. But I think it is important to never just assume that it’s always going to be that way.”

Itoje could do for London inner city rugby what Siya Kolisi is doing for the sport in townships.

Although Owen Farrell is still himself a mere 28, Itoje looks real FEC (future England captain) material. Yea, still only 25. It’s scary to think what he might go on to achieve.

A legend and one of the game’s true icons in our midst.

Michael Darragh Macauley calls time on Dublin career 11:27
Rory McIlroy bursts out of the blocks with a 64 in Abu Dhabi 11:32
Uefa considering switch to single host venue for Euro 2020 10:15
Pogba wins it for United; Dave Hannigan recalls first taste of emigrant life 07:04
Hurling between the high rise flats: My first glimpse of the emigrant life 06:51
Crossword Get access to over 6,000 interactive crosswords