England deliver performance of a lifetime to dethrone All Blacks 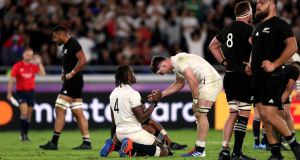 The All Blacks have been great champions, but their time is up. The rugby world didn’t quite shake to its foundations, but England wrested the All Blacks’ hold over the World Cup in emphatic fashion, inflicting the holders with their first defeat since that quarter-final against France in Cardiff in 2007.

That was also the last World Cup that England reached the final, after beating France in the semi-finals before losing to the Springboks in the decider. Were the latter to overcome Wales on Sunday, the 2019 last pairing will be the same, and thus leave England with the third leg of a trio of games against the southern hemisphere’s big three.

If that England over-achieved and were a little flattered in reaching the final, the same cannot be said of this team. Taking the game to the back-to-back champions with a carefully thought out and well executed game plan which repeatedly used the flanks in attack to find soft edges, before coming back up the middle.

George Ford pulled the strings and kicked superbly, frequently finding space in behind the All Blacks wingers. England’s superior kicking game and strategy was such that they had 62 per cent of the territory from 58 per cent of the possession.

After a bright start Owen Farrell fought through the pain barrier with a big defensive performance. Outside them, Manu Tuilagi again showed why much of England’s resurgence might not have been possible without his power game. Anthony Watson consistently beat the first tackle,England’s physicality and execution in defence was equally as impressive.

Pushing up hard, always keeping the right distance between each other, they were like a white wall in the All Blacks’ faces. Beauden Barrett, especially, and his merry men tried everything, with 21 offloads and 32 defenders beaten, but all the while England’s defensive effort was given fresh energy by the big hits of the mighty Maro Itoje and the kamikaze twins, Sam Underhill and Tom Curry.

Itoje and those two, along with Billy Vunipola, were enormous influences, and as well doing a number on the All Blacks at the breakdown, they seriously damaged the latter’s lineout, in the first-half particularly.

Ironically the All Blacks try was off one of only two lost throws by England, but it says everything about England’s dominance and defence that it was New Zealand’s only score of the game. England only scored one try as well, inside 100 seconds, but they had two more disallowed.

England lined up as a human V for the haka, which was not drowned out by the vast majority of the huge army in white in singing Swing Low. After a cheeky kick-off, Ford lining up a restart to the right before passing the ball to Farrell for him to kick left, England hit the ground running, Tuilagi touching down one minute and 38 seconds into the game.

Billy Vunipola and the pirouetting Kyle Sinckler, a remarkably quick and skilful ball player for a tighthead, offloaded in turn before Ford pulled the ball back for the charging Mako Vunipola. Courtney Lawes’ strong carry forced another soakage double-tackle, and like a scrumhalf Tuilagi picked up and burrowed over, Ford converting.

In a breathtaking start, the All Blacks transitioned threateningly from inside their own 22 to half-way in but Tuilagi picked off Beauden Barrett’s skip pass and, moments after Scott Barrett had forced a turnover at the breakdown close to the All Blacks line, they were again indebted to their flanker when cutting off Jonny May’s run to the corner.

But after Itoje muscled through an All Blacks maul to steal the ball, England had the All Blacks scrambling when Ford and Farrell combined to pick out Mo’unga in defence again with a simple switch. Although Farrell lost the ball in contact, a Courtney Lawes steal was followed up by Itoje using his strength, height and long arms to force another turnover at an All Blacks maul.

All the big moments were going with the men in white.

Cue the ‘Oh Maro Itoje’ chant, with the music from Seven Nation Army by the White Stripes helpfully playing over the stadium’s sound system during an ensuing stoppage.

The All Blacks were kicking plenty, and not very well at that. Even Beauden Barrett overcooked an aimless up and under and after George Bridge’s fine take from a Ben Youngs box kick, Mo’unga tried a crosskick to Anton Lienert-Brown but he was outnumbered two to one and tackled into touch by May.

England had a second try disallowed in the 25th minute when Underhill was sent in under the posts by but it was rightly overruled on recourse to replays by Marius Joncker, for Curry crashing into Sam Whitelock in front and before Sinckler’s pass. Nonetheless, it was a let-off for the off-colour All Blacks, as was the case when Ford was just wide with drop goal as the hobbling Farrell tried to work off an injury.

But England were full value for the 10-0 interval lead, afforded them by Ford’s penalty when Scott Barrett came in from the side.

At half-time, the All Blacks had plenty of problems to address - their kicking game, retaining possession, their lineout and either outflanking or penetrating England’s blanket defence - and decisions to make.

They opted to bring on Sam Cane for Scott Barrett, demonstrating how much they were missing Cane in the collisions, where England were kings, even if Barrett was the All Blacks’ best forward.

But, as the rain arrived in time for the second period, Cane merely worsened New Zealand’s discipline, as they conceded the first three penalties of the half and England’s dominance, if anything, grew.

Elliot Daly was wide from just inside half-way but when England went wide threateningly, Reece picked off an intercept only to give it back to Curry with a risky offload, and when Aaron Smith went off his feet, Ford made it 13-0.

Swing Low reverberated around the ground.

As is their wont, in their time of crisis the All Blacks think tank turned to their bench, introducing TJ Perenara and Sonny Bill Williams.

Ardie Savea earned them their first foothold of the second half with his strength over the ball. They went up the line and through the phases, Beauden Barrett stepping in as first receiver repeatedly. Although Underhill made a thumping hit on, of all people, Kieran Read, Cane’s offload and Williams basketball style popped pass gave Reece a run to the corner. He was thoroughly smashed into touch by Tuilagi and Henry Slade.

But with Retallick putting pressure on the throw to Itoje, Jamie George missed his man and instead found Savea for the softest of tries which Mo’unga, who had little influence, converted.

Soon though, after Underhill forced a turnover with his hit on Jordie Barrett, Cane was pinged for “jumping the gun” as Nigel Owens put it and while England might have scored a try had Ford held Youngs’ pass with the advantage play, his penalty restored their two-score lead.

Countering off a quick throw, the All Blacks lost an attacking penalty when it was reversed against Whitelock for dumping Farrell on the deck after the whistle.

It felt like the final defining moment at the time, and it was. It also demonstrated the pressure they were feeling and Whitelock was immediately replaced by Patrick Tuipulotu. It was also compounded by Retallick coming in from the side, and Ford almost nonchantly thumped the 45-metre penalty between the posts to make it 19-7.

When Reece slipped out of a tackle and slipped the ball inside to Perenara, for him to release Dane Coles the newly arrived Mark Wilson jackalled over the ball to win the turnover penalty. Entering the last six minutes, when Savea pumped his legs in contact on half-way, Farrell tackled him into touch.

The All Blacks now needed a miracle, or two tries in six minutes. They never hinted at getting one, England’s defence enveloping them until the end.