Ulster forced to dig deep before taking down Southern Kings 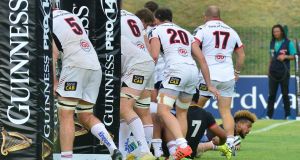 They did their level best to sound upbeat, but Ulster’s spin was hardly fit for purpose after another stuttering performance which saw the northern province come within a whisker of defeat.

As Les Kiss insisted on emphasising, Ulster had still won and gathered up maximum points to move into second in Conference B and yet, for all that, there really was no papering over the clearly visible fault-lines on show at a windswept Wolfson Stadium.

Twelve tries, seven for Ulster, provided plenty of entertainment at the Kings’ rather downbeat venue, following the switch from the Nelson Mandela Bay Stadium.

As did the fact that three times, during a manic second half, the teams were locked together on the scoreboard before Charles Piutau - who else? - created the winning score rather appropriately for Robbie Diack, the province’s longest serving South African recruit.

But there was far too much high profile malfunction from Ulster who escaped with a victory from their first game in South Africa having leant even more heavily than usual on Piutau and Christian Leali’ifano to dig them out.

Kiss, though, positively bristled at the notion that his side were way off the mark with their wobbly defence conceding a horrible five tries in the process to the weakest side in the entire league.

“Look, I could pick out a number of things and talk us down but I’m not going to do that,” Kiss insisted while discernibly circling the wagons.

“I’m going to talk up what we did do well and internally we’ll talk about the things that matter to us.

“We can go round that route of doom and gloom, but we’re now in second place in our conference.

“At the end of the day we won and scored seven tries and that’s a good win to go into the break with,” he stated ahead of what will be a much-needed gap in games until November 24th.

“Panic stations wasn’t necessary, we just had to keep fighting,” he insisted.

In fact, had the Kings - who managed to glean their first points, two of them in fact, of the season - been more accurate during their wind-assisted first half then Ulster may not have been able to recover from their early 12-0 deficit.

And failing to score at all when Kings’ fullback Yaw Penxe was sent to the bin for a deliberate slap-down in the 32nd minute - the second successive time Ulster have managed this feat against 14-men - was another deeply disturbing outcome.

Opting to play into the strong breeze, Ulster were on the back-foot from the off after early tries from centre Berton Klaasen and full-back Penxe along with a conversion from Oliver Zono.

The hard-grafting Sean Reidy then pulled a score back after Ulster, with Leali’ifano and Piutau to the fore, had gone the length of the field.

After a Zono penalty, hooker John Andrew touched down before Darren Cave’s pass to John Cooney was intercepted by winger Michael Makase who kicked downfield and just beat Piutau to the touchdown.

Zono’s conversion made it 22-10 to the Kings at half-time as the home side turned to face the conditions.

Andrew’s second in the 50th minute, quickly followed by Cooney touching down for the bonus point and converting his own effort, levelled the scores at 22-22.

But the Kings came back with Klaasen’s second - and their try bonus - which Zono converted before Ulster levelled it again at 29-29 through an Andrew Trimble try and Leali’ifano conversion.

With eight minutes to go replacement Clive Ross crossed to give Ulster the lead for the first time - Leali’ifano’s conversion making it 36-29 - but two minutes later it was 36-36 after Penxe’s second and Kurt Coleman’s conversion.

It needed something special for Ulster now and Piutau danced through to give Diack his chance to seal it, Leali’ifano’s third conversion bringing the madcap scoring to an end after a grand total of 79 points had been racked up.

1 Tipping Point: DeChambeau’s transformation raises questions, but who will ask them?
2 UK Sport to investigate ‘deeply troubling’ allegations of abuse in gymnastics
3 Tuilagi case shows England’s home-based clause is out of date
4 The Game Changers: Vincent O’Brien, a pioneer who took Irish racing to the world
5 The unsolved mystery of Goran Ivanisevic’s stunning Wimbledon win
Real news has value SUBSCRIBE