Ireland to canvass all members on World Cup voting panel 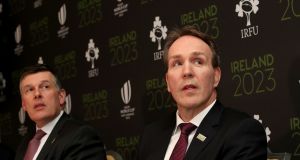 Ireland will canvass World Rugby Council members over the next fortnight to persuade them that, despite finishing behind South Africa and France in a report by World Rugby’s Technical Review Group, the Irish World Cup 2023 bid is worthy of their support when they vote in London on November 15th.

Disappointed by some of the conclusions drawn and the marks allocated in the report, the Irish bid team has spoken to all unions and federations on the voting panel to allay any concerns or questions they may have arising from the report. It will look to emphasise the bottom line that World Rugby confirmed that any one of the three bidders would be capable of hosting the tournament.

The team is also likely to remind the voters that the weighting attached to certain elements within the five main criteria and the 21 sub-categories almost precludes any smaller nation or first-time bidder from challenging for future World Cups.

It will also address issues raised in the report relating to technology, security and stadiums.

Ireland’s bid director and the IRFU’s chief operating officer Kevin Potts said they would relentlessly pursue the right to host the tournament in 2023, right up until the voting process begins. “We have reflected on the report in a measured way; we haven’t panicked.

“We sent out a couple of letters to all unions, effectively responding to the report, saying these are the points they have made about us, and while we are disappointed we didn’t get a top score we are happy with what it does say about our bid, and we would like to formally ask for your support.

“There had been suggestions that Ireland and France should step aside but that actually doesn’t honour the process. The process is about giving World Rugby Council members all the information pertinent to enable them to make a decision.

“We are now asking for the first time for people to formally support our bid or consider voting for us. We deliberately didn’t take the approach as we met unions around the world to ask for a vote there and then. It’s not right, there is a process and they needed to see this report.”

South Africa’s suggestion that Ireland should now step aside from the process met with a strongly-worded response from the Ireland 2023 Bid Oversight Board chairman Dick Spring. He said: “While it is not surprising to hear such innuendo, it is totally inappropriate.

“There is in place a democratic process, whereby the council members of World Rugby, through their vote, are the ultimate arbitrators of who will host the 2023 Rugby World Cup. To undermine this process in any way does a disservice to the entire structure.

“The recent evaluation report has stated categorically that ‘any of the three candidates could host a successful World Cup’. Ireland is now in dialogue with its many friends throughout world rugby, and their initial response to us has been one of surprise at the evaluation report and its findings.

“As we have previously stated, Ireland’s team will compete to the final whistle as we bid to turn our historic bid plans into reality.”