Coach has altered thinking of many players, but when he leaves will a mass exodus ensue? 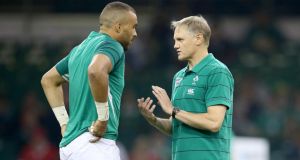 Ireland head coach Joe Schmidt and Simon Zebo. “He’s moved to the periphery. But he’s still there . . .,” the Irish coach said this week with regard to Zebo’s situation with the Ireland squad. Photograph: Dan Sheridan/Inpho

On Black Tuesday Joe Schmidt almost convinced us Simon Zebo had not been dropped at all.

“I was asked would Simon be in the mix,” went Schmidt, speaking coincidentally or not, while many were up against deadline to file copy on the damning World Cup 2023 report, “of course he would be because he was in the forefront of our thinking. But he’s moved to the periphery. But he’s still there . . .”

Such doublespeak is knotted as an unquantifiable strength yet certain curse for Irish rugby. Because in two years’ time Schmidt will be away home to New Zealand.

Journalists can leave Schmidt pressers questioning the validity of their own date of birth – March 16th, 1990 is Zebo’s and the 27-year-old figured out, via agent Shaun Longstaff, his true value and got himself paid. The man’s desire to play for Ireland, while never in doubt, was offset by the most important consideration in life: family.

The IRFU did not offer Zebo a maximum national contract. That was a clear message. It was left to Munster and a sponsor to pick up the slack. About €400,000 was put on the table before tax. Racing 92, or whichever club he joins, made a superior offer that adds up to a six-figure increase in salary after tax (which is only 15 per cent in France).

The man is being punished for earning like an athlete in his prime must. Or, more accurately, he is the cautionary tale for others, like Andrew Conway, out of contract in July.

As Schmidt said, the IRFU operates off an “imperfect” strategy. They take calculated risks. Tadhg Furlong and Garry Ringrose are seeking significant pay rises. Furlong will fill the vacant national tighthead slot if his agent, Ryan Constable of Esportif International, secures a deal somewhat comparable to the €60,000 a month the Lions tighthead could command in France. Ringrose, however, is only being offered a Leinster contract.

Doesn’t sound right, does it? Just business. Ringrose is recovering from surgery on both shoulders, and with the World Cup looming it’s safe to assume the 22-year-old isn’t going anywhere. Robbie Henshaw was bumped up to a national deal in the move from Galway to Dublin while Jared Payne – despite migraine problems since the summer – holds the other national midfield contract.

Ringrose, the IRFU are betting, will wait a few seasons before demanding Jamie Heaslip money.

How much David Nucifora can spend on salaries, how much the players see on their online banking app every month, remains unclear. Despite these professional contracts being funded by the public shelling out for expensive Aviva Stadium tickets, the figures remain private, unlike other high-stakes professional sports.

The recent off-season, when US sports do business, has seen a phenomenal reaction as other NBA giants seek to compete with a Warriors line-up that even James, a human with superpowers, was unable to stymie.

Trades were rapid, complicated and wonderful to behold. Former league MVP Derrick Rose, and his dodgy knees, took a $19.2 million (€16.5 million) pay cut, down to a measly $2.1 million (€1.8 million), to chase a title alongside James in Cleveland. The Thunder recovered from losing Durant by snatching franchise players Paul George and Carmelo Anthony from crumbling dynasties in Indiana and New York.

We don’t have enough space to write about the 22-year-old “Greek Freak” on $100 million (€86 million) over four years in Milwaukee. The Houston Rockets convinced Chris Paul ($24 million/€21 million), to leave the glamour of Los Angeles and pair up with “The Beard” James Harden ($28 million/€24 million).

The intention is to leave a legacy behind them. What Schmidt preaches is not dissimilar. Paul, in a recent documentary, explained to a Cristal-sipping Jay Z how the LA Clippers lacked title-winning intent. “I could sign five years for $210 million to stay...but basketball, boy, it’s the culture of our team. I said to them, ‘If we ain’t trying to contend with the Warriors then what are we doing?’”

This is sport at its zenith.

Rugby Union exists in a different dimension. Zebo’s departure will not have a mini-KD effect in Ireland but Murray’s decision, also guided by Longstaff, post the 2019 World Cup might prove the tipping point.

New Zealand suffered a mass exodus after the 2007 World Cup. The All Blacks could cope with losing Carl Hayman and others in their prime. Would Ireland have to bend their rules on Ireland selection if Murray leaves?

The plan is to avoid that decision. Zebo’s imminent departure, and exclusion from the Ireland squad, seems part of that overall imperfect strategy.

Iain Henderson is a smart man. Ulster and Ireland are clearly moulding their packs around the 25-year-old and he knows it. “Yeah, my contract is up at the end of the season and after the summer [Lions] tour there has been some interest from other clubs and places,” said Henderson. “I will just sit down with Joe, and maybe sit down with David Nucifora and see before making any serious decisions.”

Tells you all you need to know: Joe, and maybe Nucifora. What on earth will the IRFU do when Schmidt leaves? So much more than the head coach, a phone call from Schmidt has altered the thinking of several players, instantly outweighing the financial benefit of playing abroad.

“I’m not completely closed off to the idea [of moving],” Henderson added. “Players sometimes have to think about themselves and sometimes the club a player’s at will play on that and say ‘Well, they’re comfortable here so therefore we can offer them a bit less’.”

This brings us to the unwritten rule.

“There is no policy,” promised Schmidt, despite dropping Zebo, and then changing the conversation by noting the ongoing physical problems Johnny Sexton has suffered since proving himself an exception to the policy in 2013. “There’s one player who went to Racing 92 and was played for the first 12 games in the season, and I’m not sure he’s ever had the same resilience since then.”

In 2013, on the eve of Sexton’s departure, following the Fintan Drury deal, we took the temperature of rugby agents in Ireland. There has been significant changes since. Constable’s Corner Flag was annexed by Esportif but he continues to represent players like Furlong, Rory Best and Josh van der Flier. Navy Blue, owned by the former Ireland winger Niall Woods, has a decent player stable including Ringrose and the recently resigned Rhys Ruddock.

The IRFU likes to keep the water muddy. Zebo’s departure, while not a dam buster and regardless of Schmidt’s expertly spun web, leans heavily on the current criteria for Ireland selection.

“In my view it is not sustainable,” says Woods. “We are too small a nation to say a player cannot play for Ireland if he goes abroad for whatever reason. I don’t think anyone should say ‘You can’t play for Ireland because you are with an English or French club’ because it is already so hard to get selected. The commitment is enormous. They should not be punished for looking after their future.”

“I don’t foresee a mass exodus, but it will be gradual,” Woods continues. “If those who leave don’t get picked for Ireland it will be slower, but if [Schmidt] has to pick them more will leave.”

That’s what makes the upcoming contract negotiations for Irish players entering their prime, those valuable third or fourth contracts, so interesting.

Topping-up sponsorship is the IRFU’s main weapon. This is not just Denis O’Brien, in Sexton’s case, and Bank of Ireland, for Heaslip; there are plenty of quiet Irish millionaires who love their rugby.

There has been other financial improvements in the system. Academy contracts recently doubled from €4,000 to €8,000. A development contract of €30,0000 rises to a full €40,000 deal, more if the player is playing matches. The courageous move is to sign a one-season deal at this point on the premise that you will break into the team and be able to get a €90,000 contract in your second or third season as a pro.

The IRFU strategy is suitably vague. Still looks like Zebo was expendable. Stander and Henderson are genuine flight risks. Another key negotiating tool is stalling. It’s frustrating, and Keith Earls almost joined Saracens because of it, but it works more often than it fails. Yet the entire strategy seems unsustainable long term. Especially life after Schmidt.