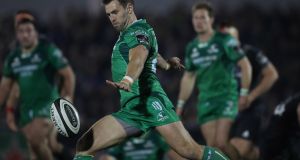 Connacht’s Craig Ronaldson in actio against Munster in their recent Pro 14 match at the Sportsground. Craig Ronaldson will partner Tom Farrell in the centre against Cheetahs. Photograph: Inpho

Connacht has every reason to be wary of first-time visitors, the Cheetahs, to the Galway Sportsground on Saturday evening (7.35pm).

The South Africans have already bagged four wins from their seven outings to date, most recently last weekend against Zebre in Italy, and they sit in third place in Conference A, eight points above Connacht.

However Kieran Keane’s side is also on something of a roll after their poor start, seeking a fourth win on the trot following their gritty 20-16 win over Munster, and backs coach Nigel Carolan says victory will be forgotten unless it is backed up this evening.

“This is our last game of a block 10 and it has been a big of a slog. We ground out a win against the odds, and it has given us confidence, but we need to jump on the back of that momentum, so it is important to stay on task.”

Both sides are missing players. Connacht are without Bundee Aki, Kieran Marmion and Ultan Dillane due to international duty, while another big loss is injured openside flanker Jarrad Butler. As a result Craig Ronaldson partners Tom Farrell in the centre, Caolan Blade takes over at scrumhalf, and Quinn Roux joins James Cannon in the secondrow, while in-form Eoin McKeon moves to openside with Eoghan Masterson starting at number six Niyi Adeolokun makes his first start on the wing.

Both teams enjoy high-tempo running rugby, but against a South African side that has scored the most in this conference, and second behind Scarlets overall, this will be a big test of Connacht’s defence, and if the weather plays its part, a high scoring game is expected.