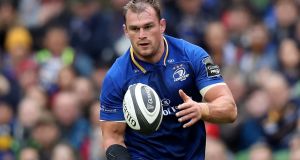 Rhys Ruddock: he has played in seven of Leinster’s nine games this season, starting all but one of them. Photograph: Billy Stickland/Inpho

From the frying pan to the fire. Muscling his way into the Leinster back-row is an achievement in itself for Rhys Ruddock, given the presence of seven loose forwards who have played for Ireland. Now, as one of four from Leinster in the current Irish squad, they are vying with a trio of internationals from Munster which includes two who played for the Lions last summer.

Yet Ruddock has never come into an international window on the back of such a good body of work, nor more match hardened and in form. Having captained Ireland in all three test wins last June in the USA and Japan, Ruddock has played in seven of Leinster’s nine games this season, starting all but one of them.

Prior to the away win over Ulster last weekend, he had started four games in a row, including the derby win over Munster and then completing 80 minutes in both European Champions’ Cup wins over Montpellier and Glasgow.

“Especially at the start of the season it’s been a rarity for me to be injury-free and playing week on week,” he admits. “So I’m happy that I’ve managed to do the work to stay injury-free and then also had a bit of luck. There is a lot of competition and a few other guys have been picking up injuries which has meant I’ve had a run of games.”

Ruddock also has that credit in the bank from the summer. “I loved it. It was an amazing experience. It was a huge honour for me and a privilege, and a lot of the guys involved in the tour were guys I played under-20s with, and captained at under-20s or played 20s with the year before.”

He also admits that captaining Ireland changed him a little. “I definitely learned a lot, and I felt like it helped me grow as a player and as a leader as well. I probably couldn’t quite put my finger on it, exactly how, but an experience like that is very powerful, and it will stand to you as well.”

He assumed an added responsibility in helping others. “If you have any sort of leadership ability and experience, then you can do that in any position. I’ve seen guys do that when they’ve not been captain, and they have this obvious ability to reinforce what we need to do. So that’s definitely something I learned; you don’t need to be captain to do that.”

Ruddock was parachuted into the Irish squad on the summer tour of 2010 from the Under-20 World Cup, and made his debut at 19 off the bench against Australia in Brisbane. He admits that was largely down to the absence of others, and that his second cap, at home to Italy almost four years later, felt more like his bona fide debut, particularly as it was in the Six Nations.

He also has vivid memories of his first start at the Aviva in November 2014, when called into the team on the morning of the game at openside as a replacement for his roommate Chris Henry after he had become unwell.

“I remember it well. I remember scoring a try. That was my first international try. I just remember that being a very special feeling. I remember the intensity and physicality of the game. I was playing ‘7’ that day and I don’t think I’d ever played a game at that space. I think that might have had a little bit to do with playing ‘7’ as well, and the difference in the role.

“I just remember it being up here [lifts his hand above his head] in terms of the level of physicality and intensity, but at the time it was probably my most enjoyable experience on the pitch as well.”

As for the upcoming Guinness Series opener against South Africa next Saturday, it could be that the trio of Lions’ tourists, Peter O’Mahony, Sean O’Brien and CJ Stander, will all be restored, although at the very least Ruddock is vying for a place in the match-day squad.

No less than with Leinster, he has long become accustomed to the intense competition at the Irish back.

“You’ll always have that disappointment, but having been in that position before I’ve learned that the best way to deal with it for the team, but also for yourself, is not to dwell on it too long because you take longer to bounce back, and you also don’t perform well in training. Whatever happens, deal with it, dust yourself off, and move on, and, hopefully, you get your opportunity later on.”