Joe Schmidt’s side face familiar foes first up, All Blacks to play Springboks in opener 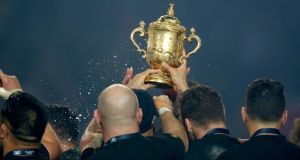 The fixtures for the 2019 Rugby World Cup in Japan have been anounced. Photograph: Dan Sheridan/Inpho

Ireland’s opening fixture of the 2019 Rugby World Cup in Japan will be against familiar foes Scotland.

Joe Schmidt’s side take on their Six Nations rivals in their opening Pool A clash in Yokohama on Sunday 22nd September - with the game kicking off at 8.45am Irish time.

Ireland will then face host nation Japan in Shizuoka on Saturday September 28th - Irish fans will again require an early alarm for an 8.15am kick off.

The final two teams in Pool A are yet to be decided - with Ireland facing the European qualifiers and the winners of a European/Oceania play-off match.

Ireland will play ‘Europe One’ - likely to be Romania - on Thursday October 3rd in Kobe, at 11.15am.

They then round off their Pool A fixtures with a clash against the play-off winner on October 12th in Fukuoka - an 11.45am kick off.

Elsewhere current world champions New Zealand begin the defence of their crown in a heavyweight Pool B clash against South Africa on Yokohama on Saturday September 21st.

There will be huge pressure on Ireland to finish top of Pool A, with the runners-up facing the winners of Pool B - likely to be New Zealand - ina crunch quarter-final tie in Tokyo on Saturday October 19th.

Should Ireland top their pool they will play their quarter-final in Tokyo on October 20th - with the Springboks their likely opponents.

The semi-finals will take place over the weekend of October 26th/27th - both at the International Stadium in Yokohama - before the tournament’s showpiece at the same ground on November 2nd.

Ticket sales for the tournament will begin in January 2018. Supporters can register their interest at www.rugbyworldcup.com/tickets.