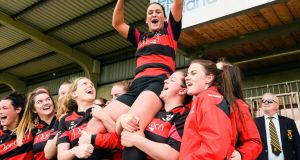 Tullamore’s Ciara Farrell and teammates after defeating Rathdrum in the final of the Women’s All-Ireland Plate at Dubarry Park, Athlone, in April. Photograph: Tom Beary/Inpho

On a recent Sunday afternoon Tullamore’s starting XV togged out for a Women’s All-Ireland League clash against Railway Union. Tullamore were still adjusting to life in the big leagues having just been promoted from Leinster Division 1. They had faced reigning champions UL Bohemian in their inaugural fixture and lost 47-17. Not an embarrassing result for a team finding their feet, but not the start they would have hoped for either. Here they were, a week later, facing a slick Railway Union outfit with a point to prove.

The match started positively enough for Tullamore until a try in the 10th minute from Railway Union’s Cliodhna Moloney set in motion a series of plays that would culminate in a crushing defeat for Tullamore. The final scoreline: 105-0.

There were tears shed afterwards. Pangs of self-doubt. A niggling feeling that they were out of their depth.

A few days later the IRFU’s performance director David Nucifora referenced the match when evaluating the state of women’s rugby. “Go and watch the AIL. You saw results like 105-0, that’s not great and has to be fixed,” he said, practically grinding salt into Tullamore’s wounds.

It was a rare bump in the road for a team that didn’t even exist five years ago and which has enjoyed a rapid ascent through the leagues, winning Leinster Division 2 in 2016 and Leinster Division 1 in 2017. So how does a new team based outside of Dublin find themselves competing in the AIL, facing rugby titans like Niamh Briggs and Lindsay Peat every week?

In a way it all started with Irish women’s rugby international Niamh Kavanagh. Kavanagh played tag rugby with Tullamore RFC at a time when the club had yet to field a women’s team. She attended college in Limerick and ended up playing rugby with UL Bohemian before making her debut for Ireland in 2011.

“When Niamh was picked a lot of the other girls around set their sights on playing full rugby, as opposed to tag,” explains Ciaran Lynch, club president and current women’s forwards coach.

It was soon decided that they would relaunch women’s rugby at the club. An open night was held in August 2013 to gauge the level of interest, with Kavanagh on hand to say a few encouraging words. The club had modest expectations for the turnout. Fifteen, 20 girls was about what they anticipated.

To their surprise 60 aspiring players showed up, and they haven’t looked back since.

That first year was a learning curve for many of the players, some of whom were arriving with little knowledge or experience of the game.

“A lot of the girls didn’t know the rules, they didn’t know anything about it,” says Lynch. “But it was great fun. I remember being out there when they scored their first try. Some of them were nearly crying on the pitch. It was hugely emotional.”

A stint in the Connacht Development League culminated in a win over Castlebar in the Connacht Invitational Cup. They moved on to Leinster, where they embarked on a whirlwind three-year campaign.

“We were competitive every year,” says Lynch. “We got beaten in Division 2 by Railway Union three years ago. That gave us a fierce hunger to come back and do better. So the next time we came back and we won Division 2 and Division 1 and now we’re up in AIL.”

Lynch makes it all sound relatively straightforward, but their rapid progression is an impressive feat for a midlands club.

Four years since that open night Tullamore now have 30 women training regularly under coach Colin Hughes. International players like Ailsa Hughes and Nichola Fryday have come through their ranks, as well as promising young players like Shannon Touhey and Megan Burns, both of whom have represented Ireland in U-18 girls sevens.

As of now the team are settling into the All-Ireland League. In their first few games they were unfortunate enough to come up against heavyweights UL Bohs, Railway Union and Old Belvedere, which Lynch likens to “running into a buzzsaw”. After five matches they sit at the bottom of the league, a single losing bonus point the fruit of their efforts thus far.

Lynch says that some players are still “overawed” by the fact they are now playing alongside women they have regarded as their sporting heroes. In fact, he tells a charming story of one of the team’s younger players asking for Niamh Briggs’ autograph ahead of their match with UL Bohemian.

“You’re going out on the pitch to play them, you’re not going out to sightsee,” he had to tell her.

Their 105-0 defeat to Railway Union, which saw them concede 17 tries, did little to shake the feeling that they weren’t at the level of their AIL opponents. “That was the big shellshock,” says Lynch. “We had to try and rally from that. We had to convince girls ‘on the day we ran into a team that performed superbly.’ They had probably their strongest team out all year. They had a point to prove as well. They’re trying to blitz this league, and they have their own agenda.”

A few weeks ago the defeat came into sharp focus once more when Tullamore’s AIL rivals Old Belvedere released a statement criticising what they described as the IRFU’s “lack of respect and ambition for the women’s game in Ireland”.

After lambasting the union’s decision to advertise for a part-time coach for the women’s international team, the club said they were “extremely disheartened” by the manner in which Nucifora had spoken about Tullamore and accused him of demonstrating little interest in the AIL. Tullamore followed up Old Belvedere’s statement by saying it was “demoralising” to have their “four-year journey to promotion rubbished” in such a way.

For his part, Lynch says that Nucifora’s comments were technically “factually correct”, but pointed out that he had never personally seen the performance director at an AIL match. More broadly, he pointed to the “mixed messages” coming from the IRFU regarding the nature of the role of the Ireland women’s coach, and expressed frustration at the absence of a plan from the IRFU on how to develop women’s rugby.

Lynch welcomed the IRFU’s decision to create a committee headed by Mary Quinn and Su Carty to review the strategy of the women’s game and make recommendations for going forward, but refrained from heaping praise on the organisation.

“Everything they put into women’s rugby is to be very welcomed, but I want to see what it is before I can comment on whether it’ll make a difference or not. Until then it is window dressing.”

Lynch goes on to tell an anecdote, which encapsulates the importance of building on the legacy of the recent Women’s Rugby World Cup.

Fryday, the club’s sole senior international player, was visiting Tullamore’s clubhouse on the World Cup trophy tour. Girls gathered to sneak a glimpse of the silverware and to hear Nichola speak. “They went out then for a bit of a game and they were playing something, but we heard two 10-year-old girls arguing over which of them could be Nichola Fryday,” says Lynch. “One of them says, ‘I’m Nichola’, and the other says, ‘no, I’m Nichola’. That’s why the legacy is brilliant.

“For me it’s the biggest advantage women’s rugby has over men’s rugby. The stars are still playing in the club. They’re easy to see and they’re accessible.”

On Sunday Tullamore face Blackrock, who themselves recently endured a 62-6 defeat to Railway Union. Their short-term goal is to get off the bottom of the league and secure one or two victories. In the long-term the team want to get accustomed to their new surroundings and used to playing among the stars of the game.

Given all they’ve accomplished in the last four years, you’d be a fool to underestimate them.