French Rugby Federation President Bernard Laporte says he is surprised at an evaluation report that recommended South Africa ahead of France and Ireland as hosts of the 2023 Rugby World Cup. Video: Reuters 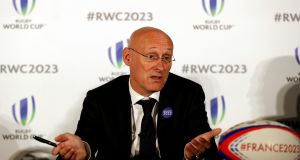 Bernard Laporte, president of the French Rugby Federation (FFR), has accused World Rugby of 'lies', 'negligence' and 'amateurism' while questioning the independence of the report that recommends South Africa hosts the 2023 World Cup.

Laporte claims the FFR and IRFU have both made formal complaints about the process to World Rugby chairman Bill Beaumont ahead of the November 15th vote.

“What bothers me, primarily, is that the process was misguided, flawed,” Laporte told Le Figaro. “World Rugby told us that two external and independent companies would be mandated to conduct the audit. There was only one, and they ignored some aspects.

“In the end, 80 per cent of the report was made by World Rugby employees. I do not like being lied to! That’s why I wrote to Bill Beaumont to ask why the process was different from the one they advertised.

“The Irish did the same,” Laporte added. “They started the protest by sending a letter before ours.”

World Rugby have previously stated that The Sports Consultancy [based in London], Dow Jones Sports Intelligence and IMG assisted the technical review group come to recommend South Africa as the best option to host the tournament in six years time.

The Irish government agreed to pay the £120 million guarantee to host the tournament but France offered a £150 million while South Africa topped that by agreeing to pay £160 million.

Laporte is furious that the report docked the French bid vital marks due to the risk attached to unlikely clashes with the French soccer season and their anti-doping policy.

“We discovered so many anomalies,” Laporte continued. “There are obvious mistakes. How can World Rugby say that hotels in the most visited country in the world are worse than those in South Africa? How can it be said that there are not enough hotels in Saint-Étienne which, for the record, hosted European Championship football matches 18 months ago. They make fun of us there!

“How can they dare to say that France is not able to better organise international sports events than South Africa? During the last 10 years, 21 have been organised (football, handball, athletics et al) and South Africa just two! They give us less marks than them for the quality of our stadiums but of our nine stadiums, five of them are new!”

On the issue of security - when all three bids were rated equally despite France recently experiencing a state of emergency and South Africa’s “historical” crime problems - Laporte states: “According to the official statistics from the South African police there are more than 19,000 murders last year (the French Ministry of Foreign Affairs currently advises French nationals not to travel to South Africa, now in the grips of violence against white farmers). It’s crazy!

“France gave the necessary assurances in terms of security but South Africa, on the other hand, just had the Commonwealth Games 2022 withdrawn for security reasons.”

Laporte also questioned the report overlooking the French assurance of delivering a profit £64 million greater than South Africa, with an additional €12 million to develop rugby around the world.

“A fairer rating would have placed us well in front of South Africa. We are not happy.”

Laporte continued: “I do not want to incriminate anyone. I cannot imagine for one second that they wanted to favour one nomination over another. It would be serious. No, I honestly think it’s negligence. Amateurism.”

The French bid lost marks in several categories - including stadium and medical services - for not providing sufficient clarifications to the review group.

“We show point by point all the inconsistencies in our letter to Bill Beaumont but also to all the federations that will vote.”

Sports Extra customers get every LaLiga match at no extra cost 15:02
Six Nations: Pundits, journalists and players have their say 15:00
Irish striker Jonathan Afolabi joins Dunfermline on loan 14:27
Six Nations 2020: Scotland desperately need something to shout about 14:00
Simona Halep continues serene progress in Australian Open 13:20
Here is your handy guide to sport on television this week