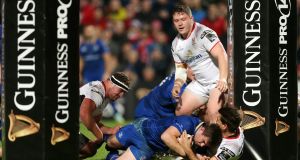 Leinster’s Luke McGrath scores a try against Ulster during the PRO14 clash at the Kingspan Stadium in Belfast. Photograph: Darren Kidd/Inpho

Attention soon switches to the November Test window, with Ireland playing the first of three Tests against the Springboks on Saturday week, but in the meantime the Irish management and the four provinces all undertake varying juggling acts.

There is some significant business to be done yet in the Guinness Pro14, and Leinster are resigned to being without the vast bulk of their 18-strong contingent in the 38-man Irish squad (which assembled in the Carton House yesterday) before facing Glasgow Warriors, the runaway leaders of Conference A, at Scotstoun on Friday evening.

The Irish squad will remain together until tomorrow afternoon, before coming back into camp on Thursday for two more days, at which point the Irish management will most likely release a smattering of players back to their provinces.

In Leinster’s case, for example, the likes of Adam Byrne, perhaps Dave Kearney and maybe one or two of their back-row contingent could be released for the Glasgow game, but it’s unlikely that 20-year-old lock James Ryan will be one of them.

Ryan, like Noel Reid before him, failed an HIA and will observe the return to play protocols this week. But none of Ulster’s six-strong contingent will be released, as Ulster undertake their trek to face the Southern Kings today.

Those half-dozen Ulstermen and, Ryan apart, 14 Leinster players involved in the latter’s impressive 25-10 win at the Kingspan Stadium on Saturday evening emerged relatively unscathed. Both the Irish captain, Rory Best, and the Leinster captain for the night, man-of-the-match Seán O’Brien, declared themselves fit and ready for the Springboks after each made just their second appearance of the season.

Having made a dozen changes, and losing both Reid and Ryan in the first quarter, a wonderful solo try by the former’s replacement, 20-year-old Jordan Larmour set their win in motion in what was yet another statement of Leinster’s famed strength in depth.

“Over the course of the year you need it,” said Leo Cullen afterwards.

“It’s something we’ve built and worked so hard on, giving young guys the opportunities two years ago and last year, and suddenly you’re in a lot healthier place. It takes time, but we’re trying to build a competitive group and they’re working hard for each other at the moment, which is probably the most pleasing thing – young guys coming in and older guys are very encouraging with them as well and they’re trying to create a place where they can be competitive be able to compete with the best teams that are out there.

“You need to chop and change your group. That’s just a fact of life. It’ll certainly be a fact of life when we rock in Monday and there’s 18 guys in international camp,” he added, laughing. “So we’ll have a younger group again. The age profile will be very, very young and there’s a few injuries on top of that, which we all have. I suppose the only thing that is positive is that Glasgow are a team who are similarly affected, so it will be a bit like for like.”

Although Leinster inflicted Glasgow’s second pool defeat in the Champions Cup last Saturday week, the Warriors possess the only unbeaten record in any of the three major European leagues, but Cullen did not subscribe to the view that the spate of absentees due to the impending November Tests devalued the fixture.

“That’s the beauty of the league as well, there’s a little pot luck in the fixtures. We even looked at our fixture list against Ulster’s they’ve more home games than we have, and who they play at home versus who they play away even. Some teams are missing a lot of players, some teams are hardly missing any, so there’s a bit of pot luck.”

For their part, Ulster must bounce back from their mauling in La Rochelle and a six-day turnaround to this damaging home defeat against by embarking on the mother of all away treks to face the Southern Kings.

Their squad is restricted to 25 players and heads off to London this afternoon, where they’ll wait four hours for their connecting flight to Johannesburg, and another five hour wait there for the final leg of their journey to Port Elizabeth. They complete their 25-hour trek and arrive there at 4.30pm on Tuesday.

“That’s what it is,” said Les Kiss. “We can lean on that and use it as a way out but we won’t. I won’t let that happen and the coaches won’t let that happen. We need to be better than we were and that starts with the first part of preparation. That starts now. There’s 24 hours of travel, it’s a long flight, and we have to hit the ground there, get one good session and a captain’s run.”

The logistical planning has been compounded by injuries, although they have the facility to change some names at the last minute.

Jean Deysel suffered a recurrence of his shoulder injury, which will sideline him for two or three weeks, and in addition to their absent half dozen Irish squad members, Kyle McCall, Wiehahn Herbst and John Cooney remained doubtful, although Darren Cave should return.

Nonetheless, Kiss maintained: “There’s a genuine enthusiasm about it. We’re not going on holiday, we’re going for a job. We’ll have to mix up the training in the off time to make it work. Rugby is like that, it gives you those experiences but it comes down to 80 minutes and there’s no doubt we’re excited and enthused about it, just down after tonight.”