Leo Cullen and Leinster know Connacht can cause problems 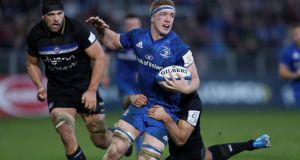 Dan Leavy in action against Bath. He is one of three players retained from last weekend’s Leinster team for the game against Connacht. Photograph: David Davies/PA

Connacht have administered two of the most painful defeats suffered by Leinster in recent times, the 2016 Pro12 final at Murrayfield and a 47-10 drubbing last season, the latter bookended by a John Muldoon conversion, an act that wasn’t appreciated by some of the vanquished.

It caused a ripple effect that gently lapped at the build-up to the meeting of the two provinces earlier in the season. Leinster went down to prove a point in Galway and they did so in victory. This is Connacht’s opportunity to offer a riposte.

They haven’t won in Dublin since 2002 but they travel in expectation rather than hope based on a strong team selection.

In contrast Leinster have rested all bar three – Adam Byrne, Rory O’Loughlin and Dan Leavy are the exceptions – of the team that hammered Bath in the Champions Cup last weekend.

Leinster’s head coach Leo Cullen smiled when reminded that he played when Connacht last triumphed in Dublin recalling, “the feeling that ‘I’m going to remember this one for a long time and people are probably going to be reminding me of it in years to come’.

“I remember what it meant to the Connacht players at the time and (also) being part of that team that loses to Connacht in Donnybrook at home. It’s the nature of these games, there’s something extra special about them, you need to make sure you prepare as well as possible for the game.

“I can’t remember that week’s preparation but I certainly remember the game and losing and it stays with you forever.”

Provincial derbies rarely lack spice but there is an extra sprinkling for players that have been let go, overlooked, passed over; they invariably return to their birthplace keen to prove a point. Cian Kelleher, Tom Farrell, Gavin Thornbury and Paul Boyle all wore the blue of Leinster at one level or another so this game holds a personal attraction.

It’s not about ill will, a grudge or a sleight, perceived or otherwise, rather a chance to make a point, where the argument is most persuasive; on the pitch.

Tom Daly is the latest to head west on a short term loan as he seeks more game time at professional level and will relish the prospect of linking up with his old Lansdowne teammate Tom Farrell.

Cullen explained: “I had various different conversations with Tom over a period of time. There was an opportunity that presented itself to go to Connacht and we discussed the merits of it and talked about some of the opportunities. Tom was keen to progress that and we wanted to fully support him to make sure he’s happy with how he is progressing in his career.

“There are always players at Connacht who have passed through the doors at Leinster; they have a point to prove and that always makes them incredibly dangerous. We saw firsthand last season when we got beaten 47-10 in the Sportsground what it means to them when they’re playing Leinster.

“It was a tough physical challenge earlier this year so it’s a game that has a lot of threats for us always. We’ve had some very close games and some games where we have been well beaten, particularly down in Galway over the last 10 years or so.

“I know a lot of those guys are good. They have gone away and proved themselves in a different environment, had to deal with moving around etc; they have all moved for different reasons. When they come back to play Leinster they have a point to prove, always. There is always something extra special in some of these particular fixtures.”

Connacht’s head coach Andy Friend is doing an excellent job in rotating players and adding depth without compromising the ability to win matches. The visitors are in fine fettle based on results of late and while there are a few injuries – Niyi Adeolokun, Matt Healy and Kieran Marmion – it’s a still a strong side.

Leinster may be missing the majority of their frontline players but, as the Ospreys and Dragons discovered in shipping over 50-points apiece, there appears a fathomless depth to the quality at Cullen’s disposal. The home supporters will be hoping that fullback Hugo Keenan and centre Conor O’Brien reprise the excellence of their last outings.

Connacht centre Tom Farrell has deservedly attracted the attention of Ireland coach Joe Schmidt, Tiernan O’Halloran and Kelleher are a real handful in attack while the visitors scrum and lineout can be formidable. A decision to pick two opensides in Jarrad Butler and Colby Fainga’a suggests they may take a leaf from Bath’s playbook.

Both teams will look to put pace and width on the game which should ratchet up the entertainment factor. The bookies have Leinster as 14-point favourites; it seems harsh on the visitors, but while the contest should be a good deal tighter, they’re probably right about the outcome.