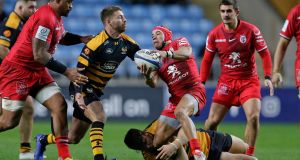 Players such as Willie le Roux could be left in limbo before the official World Cup window opens. Photograph: Henry Browne/Getty Images

English Premiership Rugby has threatened World Rugby with legal action in an escalating row over player insurance that is set to hamper a number of nations severely, including Wales and Scotland in the buildup to next year’s World Cup.

The Guardian reports that Premiership Rugby on Thursday wrote to World Rugby, giving it 21 days to agree to major changes to its regulations that govern player insurance or face a legal battle. As exclusively revealed by the newspaper last week, Premiership Rugby (PRL) is already planning to prevent all non-England players from joining up with their respective countries until mid-August, only 35 days before next year’s tournament starts in Japan.

The dispute centres on World Rugby’s Regulation 23 which currently states clubs will be compensated by unions for players injured on international duty who earn £225,000 or less per year. Anything in excess of that is picked up by the clubs.

World Rugby has agreed to increase the threshold to £350,000 but PRL wants no limit at all and requested it be removed in October on the basis there are 60 non-English internationals in the Premiership earning £225,000 or above, and 25 on £350,000 or above. That was rejected, as was another request to do away with the 12-month limit, which means clubs being liable for any injury longer than a year.

Shortly before the 2015 World Cup, PRL reached an agreement with World Rugby – a similar deal to that it employs with the British & Irish Lions and the Barbarians – that provided the additional protection it wants, thereby ensuring the early release of players for that tournament. That deal expired in June this year, however, and has not been renewed.

“We went to World Rugby with this set of principles and frankly we’ve reached the point where we’ve exhausted all our other options,” PRL’s director of rugby, Phil Winstanley, told the Guardian. “We would hope that World Rugby realise we are serious and this needs addressing. We’ve had a lot of dialogue but we have to draw a line in the sand. We can’t keep having conversations about it and not actually doing anything about it. Especially on the basis that we had an agreement in place for three years and that appears to have been withdrawn.”

The failure to reach an agreement since June has led to PRL’s hardline stance over the release of players before next year’s World Cup. PRL is still obliged to release players for international duty during official Test windows, into which the Six Nations and most autumn internationals fall, but do not have to do so next summer until August 16th.

As a result Wales are set to be without Liam Williams, Taulupe Faletau and Dan Biggar for their altitude training camp in July and their first World Cup warm-up match against England at Twickenham on August 11th. Scotland will also be significantly affected after selecting nine Premiership players in their autumn squad and may also be denied early access to Stuart Hogg, who joins Exeter next season.

PRL will have to release Sanzaar players for the Rugby Championship but players such as Faf de Klerk and Willie le Roux could be left in limbo when that competition ends and before the official World Cup window opens. Italy and a host of tier two nations will also be affected.

“The reality is we will continue to release while this legal action continues but only in accordance with Regulation 9,” said Winstanley. “We don’t want to put the players in a difficult position but as a group of employers, why would we want to release players voluntarily outside of that window and be at risk of significant financial damage?”

PRL has also written to the unions affected to inform them of its stance. There is nothing to stop the Welsh or Scottish unions negotiating a separate insurance deal with PRL but Winstanley believes that would be unfair on those who cannot afford to do so as World Rugby currently underwrites insurance for all tier two nations.

“We’d have the conversations but I don’t think it should be fixed on an individual, if-you-can-afford-it basis,” he added. “This is a solution that’s needed centrally through World Rugby that satisfies the security for all nations.”