Meanwhile, Andy Friend has called on some returning internationals for the meeting 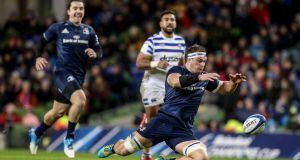 Leinster’s Rhys Ruddock will captain the side for the Pro14 meeting with Connacht. Photo: Dan Sheridan/Inpho

Leo Cullen has made 12 changes to his starting lineup for their first interprovincial derby of the festive season against Connacht.

Most of the province’s main internationals have been rested for the almost sold-out derby with Rhys Ruddock set to captain a young-looking side.

Hugo Keenan gets his third start of the season with the academy player lining out at full back with try scorer from last week Adam Byrne on the right wing and Dave Kearney on the left.

Another academy player Conor O’Brien starts at inside centre with last week’s man of the match Rory O’Loughlin outside him.

Jamison Gibson-Park and Ross Byrne are the starting half backs for Cullen.

In the pack Peter Dooley, Bryan Byrne and Michael Bent are in the front row with Mick Kearney and Scott Fardy behind them in the second row.

Ruddock captains the side from the blindside with Dan Leavy selected at openside and finally Caelan Doris selected at No8.

Meanwhile, Connacht have made 10 changes to the side that lost to Perpignan in the Challenge Cup last weekend with a number of internationals returning to the starting lineup.

Finlay Bealham and Ultan Dillane come into the team while Bundee Aki is on the bench.

Bealham comes back into a front row that sees Denis Buckley returning at loosehead and Tom McCartney retained at hooker. In the second row Dillane will line up alongside Gavin Thornbury with James Cannon named among the replacements.

Captain Jarrad Butler comes back into the side at blindside alongside Colby Fainga’a and Paul Boyle at No8.

Jack Carty and Caolin Blade renew their half-back partnership, while the back three sees Darragh Leader come in for Matt Healy who picked up a knock in training during the week, with Cian Kelleher named on the opposite wing with Tiernan O’Halloran at full back.