Irish provinces maintain control over their destinies in a triumphant weekend

Munster’s loss to Castres is in stark contrast to wins by Leinster, Ulster and Connacht 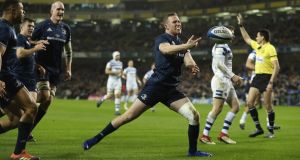 Rory O’Loughlin of Leinster celebrates after scoring a try against Bath at the Aviva Stadium in Dublin. Photograph: David Rogers/Getty Images

First, the good news. All four Irish provinces still have their European destinies in their own hands. After three rounds of festive interpro derbies, each of them will return to Euro fare in January knowing that two more wins will ensure their qualification for the knockout stages.

However, not all was sweetness and light over the weekend, least of all – surprise, surprise – when Munster returned to Castres on Saturday and lost 13-12, in stark contrast to the bonus point wins achieved by Leinster, Ulster and Connacht.

Familiarity breeds contempt, it’s said, and rarely more so than when these two lock horns. No two teams have met more often in the Champions Cup, and this 16th meeting further poisoned the river of bad blood between them.

Amongst a myriad of other tempestuous, unpunished moments, Peter O’Mahony could be heard complaining to referee Wayne Barnes about a case of hands in the face of Munster flanker Chris Cloete by Castres’s Rory Kockott which was clearly caught on camera.

Munster head coach Johann van Graan wouldn’t be drawn on this or other specific incidents in the match, but he wryly looked ahead to meeting the tournament’s referee supremo Joël Jutge.

As seen during Leinster’s defeat in Toulouse in October, a fiery, feisty game in the south of France is probably not where you want Barnes, who was far more assured in overseeing the Ireland-New Zealand game.

Here he again cut a flustered figure at times, as Castres conceded two yellow cards to one and a 14-10 penalty count. But by the end, Munster could only blame themselves really, given their four missed penalties, flawed breakdown work and game management.

O’Mahony candidly admitted as much. “I don’t think we played well enough. Again, our breakdown was very poor. That’s really the heart of the game. We were beaten there across the board.

“I don’t think we deserved to win. There is plenty of inaccuracies that we need to have a good look at.

“We are still top of the pool and that’s where you want to be. It’s an incredibly competitive and difficult group and the last two days have blown it open again. We had an opportunity to really get a hold of it and grab it by the neck. We weren’t good enough to do it. It’s going to be two huge games coming up after the Christmas interpros.”

Munster now need to generate some winning momentum through the three derbies, as they head in to what is now a must-win game away to Gloucester on Friday, January 11th. They still lead the four-way arm wrestle in Pool 2, and two wins will secure a place in the quarter-finals, albeit now almost certainly away from home.

The following day Leinster host Toulouse in a mouthwatering Pool 1 summit meeting between the two four-time champions. The holders responded to Toulouse’s 42-27 bonus point win at home to Wasps by registering an 11th successive win at the Aviva Stadium with a 42-15 victory over Bath, in front of a crowd of 40,261 – the biggest of this season’s tournament so far.

“It was important we stay in touch because it was always going to be difficult to get out of the pool,” said Leo Cullen. “We are in a slightly better position; we’ll see how the other pools sit but, for us, it is a simple focus to just go out and win two games and hopefully that’s enough for us to top the pool.”

A change in the format for the semi-final draw this season means that a top two seeding would not only ensure a home quarter-final but the carrot of home-country advantage in the semi-finals. Hence Leinster could probably do with Ulster denting Racing’s unbeaten streak when they meet at the Kingspan in January, after the Parisians maintained their 100 per cent record with yesterday’s 34-11 bonus point win away to Leicester.

Ulster trail Racing by five points on 14, after setting up a Pool 4 summit meeting by completing a fine 10-point haul over the Scarlets on Friday night.

“If you go into the back-to-backs having won the first one and then take both of them, you’re in a really good place,” said Ulster head coach Dan McFarland. “Racing are one of the best teams in Europe; both they and Leicester have a tremendous European pedigree. There’s no right from the position we’re in now to qualify. We certainly have to go out there and earn it. [For] anybody who is an Ulster fan, or a rugby fan, Racing coming to Kingspan is an exciting prospect.”

Akin to Leinster and Ulster, Connacht have set up a meeting at home to their Challenge Cup pool leaders Sale on January 12th, after Friday’s bonus point win away to Perpignan was then augmented by the Sharks’ surprising defeat at home to Bordeaux Bègles.