Minimal changes and momentum give Ulster the edge

Darren Sweetnam, Jean Kleyn, Conor Oliver and Tommy O’Donnell are back for Munster 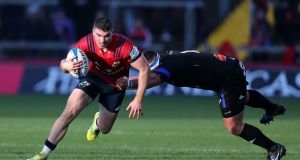 Munster’s Sam Arnold: how he fares against Will Addison promises to be an interesting midfield battle. Photograph: Niall Carson/PA Wire

Sibling rivalry over the Christmas and new year period adopts various guises as the Irish provinces square off against each other, a sequence of three matches that are rarely less than full blooded irrespective of team selection because all the combatants have something to prove.

This match is a classic case in point as Munster head coach Johann van Graan makes 13 changes to the team that lost in a tempestuous Champions Cup tie away to Castres Olympique – fullback Mike Haley and centre Sammy Arnold the only survivors.

His Ulster counterpart Dan McFarland makes minimal alterations to the side that scuttled the Scarlets at the Kingspan last time out.The outstanding Iain Henderson is an injury-enforced absentee – Ian Nagle on a short-term loan from Leinster deputises – while the other two changes see Rob Herring take over from Rory Best as hooker and captain, and Irish Sevens international Robert Baloucoune coming in for the free-scoring Jacob Stockdale on the left wing.

McFarland has overseen an excellent run of results recently, and obviously wants to sustain that momentum while conscious of the almighty shellacking Ulster received earlier in the season in Limerick.

Van Graan has a slightly different selection agenda – a group of players would have been in Ireland camp early in the week – and is certain to pick a much stronger team when Leinster visit Thomond Park on Saturday week.

The Irish player management programme has a significant impact on team selections as match minutes are managed carefully, while there is also the consideration of the Conference tables; Ulster and Leinster are not in Munster’s conference and therefore not direct rivals for a place in the playoffs.

Darren Sweetnam, Jean Kleyn, Conor Oliver and Tommy O’Donnell are back for Munster following injuries of varying severity, while there are a number of players who understand the value of opportunity when it’s an irregular occurrence.

There are duels that have broader connotations, one of which will be to see how Arnold fares against Will Addison in what promises to be an interesting midfield battle.

JJ Hanrahan was match-of-the-match in his last start for Munster, and will be keen to reinforce that form. Kleyn and Botha will add power up front, while Oliver, in his first game of the season, is a talented prospect; so too Bill Johnston, Shane Daly, Fineen Wycherley and Gavin Coombes, young players with ability and athleticism.

Ulster have found a playing rhythm that has brought victories, with Stuart McCloskey, Addison and Henry Speight providing a cutting edge, the halfbacks intelligent direction and the backrow a huge appetite to work on both sides of the ball.

Marty Moore has brought stability to the scrum, while Eric O’Sullivan has been a revelation. The home side are short in terms of fit secondrows, so flanker Clive Ross acts as cover.

McFarland’s side are eight-point favourites, a rating that is informed by selection, the momentum of recent performances and a chance to offer some redress to their supporters who made that trip to Thomond Park.

Munster will be competitive, but maybe a little undercooked in terms of cohesion with a scratch side and also one containing several players returning from injury.