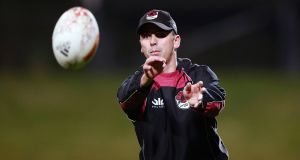 Noel McNamara: “Taking on that challenge was exciting. For me it was about trying to create a culture around our defence. I certainly got a buy-in [from the players]. Photograph: Anthony Au-Yeung/Inpho

Noel McNamara has managed to shoehorn a massive workload into the past 12 months.

It began from the moment he took over as head coach of the Ireland Under-20 team, guiding them through the age-grade Six Nations Championship and a Junior World Championship in France. Then last August he agreed to a three-month work placement as defence coach to North Harbour in New Zealand’s Mitre 10 Cup.

His posting to New Zealand was part of the IRFU’s coach development programme. Ireland head coach Joe Schmidt was a catalyst in securing McNamara’s placement as was the IRFU’s performance director, David Nucifora, both of whom coached David Gibson, the general manager in North Harbour.

The idea was mooted early in the year with the final sign-off a couple of weeks before McNamara travelled to New Zealand. He discussed the venture with his wife Sinead, as the Clare native would be uprooting his family – he has two young girls – and taking them to the other side of the world.

He explained: “For us as a family it was a great adventure, for me professionally it was a wonderful opportunity to go over and coach in that competition. There was one other phone call that assuaged any doubt. He spoke to North Harbour head coach Tom Coventry, struck up a rapport, and clarified that his role would be meaningful within the set-up.

While a team like Canterbury had 27 Super Rugby players at their disposal, North Harbour boasted 13, including a number of All Blacks, with the other 17 players in the squad comprising club and development players and including a policeman, farmer and a lawyer. Those not involved in New Zealand’s Northern Hemisphere tour played in the Mitre 10 Cup.

McNamara arrived a week before the tournament started so the acclimatisation period was brief and some of the processes would have been appreciably different.

“Coming from my background of teaching, presenting that is something that I would be confident in and comfortable with; that’s something they do very little of over there. It’s very much of a flow through the week, so teaching and learning early in the week, checking for understanding into clarity later on in the week.

“The players’ ownership increases as the week goes on. You meet with the core defence group, present the week to them, review the previous game and prep for the upcoming threats the following weekend. Those players go back and meet the rest of the team and they present to each unit.

“Over here we are lucky in that we have a huge capacity for our players to take on lots of information. Over there it’s a slightly different approach around learning. Taking on that challenge [of defence coach] was exciting. For me it was about trying to create a culture around our defence. I certainly got a buy-in [from the players].

“We are lucky up here in that we have one of the best defence coaches in the world in Andy Farrell and Stuart Lancaster is a brilliant defence coach as well. I tried to implement some of the principles, some of the mindset around defence. As a group they wanted to learn.

“There is a limited amount of time on the pitch. Yes you can do it in training but so much more happens around individual conversations, one-on-ones, those core groups. I firmly believe that when you are under the most pressure you will become your habits.

“I spent some time with Dave Hadfield who is influential in terms of coach development in New Zealand. That was insightful.”

The focal point was the way in which players took more ownership as the week went on. It extended to matches where there was only one radio in the coaches’ box.

McNamara explained: “There is only one voice going down to the pitch-side. The first question tended to be ‘what are the players saying?’ before any message was given out, rather than saying do this, this and this.

A stickler for detail, McNamara returned with notebooks full of ideas, some of which may be evident at Donnybrook this afternoon when his Ireland Under-20 team begin their preparations for the Six Nations with a game against a Leinster development XV.