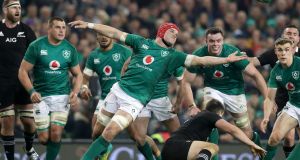 Josh van der Flier is a bad choice for reviewing 2018. But there’s a story in his recovery from Paris to the night the All Blacks were ruined.

“It was seven months and one week since the injury and it was six months and three weeks from surgery,” the 25-year-old remembers. “I was back September 15th and I got injured on February 3rd.”

Van der Flier, the starting openside against France last February, sat home and stewed. As Leinster eased towards the double he pleaded with physio Fearghal Kerin, “Can I run now?”

“No. Another month and a half.”

“No. You’ll flare something up and it will set you back.”

Visualisation became a weapon. Ever since the knee buckled, returning for the All Blacks game on November 17th was carved into his psyche.

Seán O’Brien broke his arm against Argentina so Dan Leavy arrived to remind everyone of his brilliant season, only for a damaged neck the week New Zealand came to Dublin to reopen the door for van der Flier. Sixteen tackles later he owns a 2-1 win ratio over the world champions.

You’d not be playing one week and one of the lads in your position might make some unbelievable carries and get five turnovers and you’re kind of thinking, I need to start doing that

“It was my goal anyway,” he smiles, sitting comfortably on home turf as Christmas fails to disrupt the hustle and bustle of the Wesley College corridors (promoting the Student Enterprise Programme). “It was obviously the goal to get back starting for Ireland but at the time I got injured it was looking like I’d be back just after the November internationals. I obviously got back a bit sooner than expected.”

“You learn a huge amount from those lads and it pushes you on. As an example, you’d not be playing one week and one of the lads in your position might make some unbelievable carries and get five turnovers and you’re kind of thinking, I need to start doing that. How do I get myself better because sometimes you think, I can’t do that, I need to learn how to do that. You try and get that edge.”

He agreed that Springbok Francois Louw and England openside Sam Underhill pilfered far too much Leinster possession at The Rec on December 8th.

“Let’s say Underhill and Louw get a turnover in a ruck you are not involved in, and it’s nothing to do with you, they are still your opposite numbers. You rethinking, they are one up now.

“It was a bit of a masterclass in poaching. We were pretty disappointed as a team . . . We gave them the opportunities to get those turnovers and they were world class in taking them. Last week we were a lot better in stopping them. Louw still got a couple of turnovers. Underhill maybe got one or two. We learned a lesson.”

The year began and ended with Josh van der Flier. Returning home to Wicklow after the New Zealand game there were letters. That has only happened after his first cap but people had dropped notes into the house. In class the other night – a business masters in DBS – a guy started talking about the weekend’s game unaware he was chit-chatting to the starting Leinster flanker.

“He obviously wouldn’t recognise me without the scrum cap.”

Van der Flier let someone else fill in the gaps.