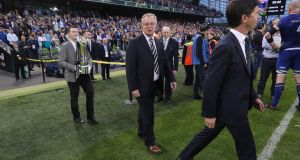 The dog’s Brexit the British government is making of leaving the European Union has put the organisers of the Premiership, Pro 14 and the European Champions Cup in a state of nervous uncertainty with the prospect of no deal in place by the March 29th departure date growing.

That falls on the quarter-final weekend in the Champions and Challenge cups, and exiting without a deal would have an immediate impact on British clubs and supporters, not least because a visa would be needed to enter a member of the European Union.

It would leave a divide among Ireland’s four provinces with Leinster, Munster and Connacht governed by European law and Ulster by British statute. That could impact on recruitment with players from South Africa, Fiji, Tonga and Samoa, who are currently classified as European because their countries have trade agreements with the EU, maintaining their status in the Republic of Ireland but not in Northern Ireland where they would fall under the foreign player rule.

“I have not experienced anything like this in my time as an administrator,” said David Jordan, the Pro14 tournament director. “We are a cross-border tournament and since we took on two teams from South Africa who are used to having different rules, they are permitted two non-South African players in their matchday squads while the other 12 teams are allowed two non-Europeans, for example.

“We are having to formulate plans for different scenarios and the uncertainty makes it difficult. If a deal is agreed, we would have a transition period and would be able to plan properly, but if March 29th comes without an agreement, we would have five teams bound by European law and seven in Wales, Scotland and Northern Ireland that are not.

“I do not think anything would change for the final two months of the season because the Kolpak players all have visas and would not suddenly have to leave, but it would have an impact on recruitment for next season. The stipulation over non-European players would have to be rewritten for seven teams. We are taking legal advice and we are speaking to the unions involved. While we have to prepare for no deal, we hope one is reached.”

A European player is defined as one who is a citizen of an EU member country. It would mean after Brexit that Welsh, Scottish, English and Northern Irish players who played in one of the other countries would technically be classified as a foreigner. It would have to be changed to British.

What makes it all the more unnerving for rugby administrators is that it is not simply a case of the EU and British government posturing while believing that a deal will be agreed, even if talks go close to the leaving date. It has to be ratified by British parliament, which is so hopelessly divided that it only agrees on disagreeing.

It is not only unions, tournament organisers, clubs and players who are in limbo but supporters. No deal would mean that anyone travelling to Europe from Britain would be treated the same as someone from the United States or Australia. From 2021 UK citizens will have to pay €7 for a three-year tracker document but if there is no transition period after Brexit, it will kick in on March 20th, the European commission has said.

“We will have to take it in our stride,” said Jordan. “We have the advantage of being a cross-border tournament, dealing with different legislation and facing logistical challenges, but with this it is a case of getting your head around what might happen. We do not know what the final outcome will be.”

The English Rugby Football Union (RFU) has been in talks with the British department of culture, media and sport about the implications of Brexit, including what would happen if there was not a deal. Who can work in the UK is a matter for the government, and sporting bodies have to comply, but player registration rules are determined by unions.

The RFU has said there will be no change this season, even if parliament does not agree a deal with the EU. What happens beyond that is a matter for discussion, such as whether players who have qualified as “Europeans” will maintain that status or whether they will need a work permit.

A question for unions post-Brexit is whether to tighten up the rules on registration to increase the number of homegrown players in squads. It would affect England more than Wales and Scotland, and the financial incentives for Premiership clubs to include England-qualified players in their matchday squads has worked to a large degree.

A club such as Gloucester that has recently signed a number of South African players could find they have to exclude all except two of them every weekend. Bristol, Newcastle and Northampton would be in the same position but Premiership Rugby would doubtless make representations to the RFU. Clubs feel they have the balance right between homegrown players and imports but with the salary cap being frozen for the next two seasons, wage increases will have to be balanced by either a reduction in squad sizes or the promotion of more academy products.

There is an argument that leaving the EU could be an opportunity for rugby but shrouded in confusion, it is threatening to be a curse. – Guardian