The deeper a team goes in a tournament, the more acute the disappointment of defeat 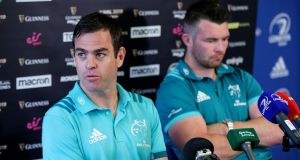 Munster head coach Johann van Graan after the defeat to Leinster in their Pro 14 semi-final at the RDS. He has a point when highlighting that Munster won three more games in the Pro 14 this season than last. Photograph: Laszlo Geczo/Inpho

Come May only two teams, and sometimes it’s only one, do enough to lift silverware. For the rest the season generally ends in a defeat or coming up short in one or both of their goals. Ironically, the better a team does in reaching the knock-out stages of one or both competitions, the bigger the disappointment as Munster know better than anyone.

Munster have now reached the semi-finals of both the Champions Cup and Pro14 for three successive seasons. Across the three major leagues, the only other side to have managed this are Leinster. Even Saracens were knocked out in the quarter-finals in Europe last season, admittedly against Leinster in the Aviva.

Most other teams in Europe would give their eye teeth for such consistency. Big-spending Bath, Ospreys, Edinburgh, Stade Francais and Begles-Bordeaux, the best-supported side in France, have not made one semi-final of any competition in that time. Cardiff have reached the Challenge Cup semi-finals once in that time, indeed going on to lift that trophy last season, but would Munster fans be happy with that? Or reaching two Challenge Cup semi-finals like Sale or Harlequins?

Munster have managed some superb wins in achieving this feat. This season alone they have beaten Exeter, Gloucester home and away, Castres at home and Edinburgh away in the European quarters, Leinster and everybody else at home in the Pro14, plus a few good wins away.

Meanwhile, Ulster’s undoubted season of genuine progress from the relative wreckage of last season and amid mass retirements or departures, under a new head coach, still ended with the pain of an abject 50-20 defeat in Rory Best’s last game.

Having gone to the well for their quarter-finals against Leinster at the Aviva and that must-win game at home to Connacht, they went back one more time and found it empty.

Connacht themselves were the most improved side in the Pro14 this season, and qualified for next season’s Heineken Cup, yet their campaign still ended in that quarter-final defeat, albeit privately they might feel they dodged a bullet in Scotstoun last Friday.

Except, of course, in all of this Munster have been here before repeatedly, and that their season came to a halt on the same day, same stage and same setting as 12 months previously merely compounded the sense of déjà vu for their players, management and supporters.

For it is the manner of these end-of-season defeats which has served to reinforce that glass ceiling above them. They have been well beaten by Saracens, twice, and Racing in their last three Euro semi-finals, and they were routed 46-22 by Scarlets in the Pro 12 final two seasons ago.

Hence, what will have particularly rankled them last Saturday is that they seemed even further away from Leinster than a year ago, when losing by a point.

That day Simon Zebo created one of their two tries with a try-scoring offload to Keith Earls, and they threatened to steal the match from their own line when he broke clear and again linked with Earls. As if to underline that his creative and finishing spark are still sorely missed, Munster’s all-time leading try scorer was scoring a hat-trick for Racing last Saturday.

On Saturday Munster’s running game cried out for more footwork close to the line, tip-on passes, offloading, more width and particularly another playmaker ala Zebo.

Admittedly they haven’t been helped by injuries restricting Conor Murray and Joey Carbery to just eight games together.

There were real glimpses of a sharpened attack, such as Gloucester in Kingsholm, but come crunch time their game lacks strike moves off setpiece ball, and after a few phases their increasing reliance on straight runners has made them easy to defend against, and fails to reward so much else they do well.

Munster’s acute disappointment is compounded by the departure of assistant coaches Jerry Flannery and Felix Jones for reasons still unexplained.

Insofar as one can tell, their decision to turn down new contracts for what they both regard as dream jobs, without other coaching roles on offer, comes after Johann van Graan admittedly publicly that he was in constant contact with Paul O’Connell and Ronan O’Gara, as well as seeking a new attack coach, and amid reports that Munster had spoken with Rob Howley.

With treasurer Philip Quinn their acting CEO as Garrett Fitzgerald recuperates from an operation, perhaps van Graan has shown his inexperience at this difficult time. If it is also true that their new roles were to be scaled down it would hardly be any wonder that they felt undervalued.

Nor are there any new signings coming in other than Nick McCarthy.

Yet amid this apparent gloom opportunity knocks, given they are looking for two or three new coaches, and David Nucifora is surely at work already.

Were they successful in acquiring, say, Stephen Larkham, it could help revitalise their attacking game, ala Michael Cheika, Joe Schmidt and, perhaps most pertinently as a senior coach, Stuart Lancaster in Leinster, or Dan McFarland and Andy Friend in Ulster and Munster.

Of course, Munster’s season looks less successful by comparison with their high-achieving neighbours who have a superior in-house production line of talent and more financial resources.

Van Graan has a point when highlighting that Munster won three more games in the Pro 14 this season than last. Their tally of 77 points would have been enough to top their Conference last season, and would have done so this season if Leinster had not lost at home to Glasgow.

Given 20 of 22 semi-finals have been won by the home side, Munster might well have beaten Ulster in Thomond Park and thus be contesting next week’s final. Then we wouldn’t be having this postmortem on their season.

Then again, they would be playing Leinster or Glasgow next Saturday, and on last Saturday’s evidence that glass ceiling would have remained in place anyway.

1 Argentinian soccer legend Diego Maradona dies of heart attack, aged 60
2 Gordon D'Arcy: I know what Joe and Cheika would do. Fix the basics
3 Darragh Ó Sé: Cork and Donegal went out with the wrong attitude
4 Ryan happy to get back to leading by example when Sexton returns
5 Can Solskjaer’s Man United find their groove when it matters?
Real news has value SUBSCRIBE

Argentinian soccer legend Diego Maradona dies of heart attack, aged 60 16:50
Cavan confirm they have no issue with playing Dublin at Croke Park 16:21
Ryan happy to get back to leading by example when Sexton returns 15:54
Mayo’s James Horan criticises ‘outrageous’ 26-player match day limit 13:52
Dundalk’s Jordan Flores on the shortlist for Fifa Puskas award 10:35
Here is your handy guide to sport on television this week