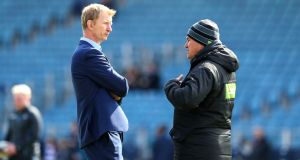 The Glasgow coach Dave Rennie has made light of Leo Cullen’s tongue-in-cheek suggestion that as the Glasgow players “all support Rangers I’ve been told”, that Celtic fans should turn out to support Leinster in this Saturday’s Pro14 final at Celtic Park.

Asked if he was “saddened” by this remark, Rennie said: “He’s a good man, Leo, I like him. As you know, I don’t read a lot of press, so Jack [Reid] filled me in on what had been talked about,” said Rennie in reference to the Warriors press officer.

“But ultimately our thinking is that we’ve got lots of players who support different football sides, based on where they originate from.

“We have a heap of football fans who come and watch us play because they enjoy the entertainment, and that’s what we’re looking for. Obviously we represent Glasgow, and we hope that regardless of what sport you’re involved in you’ll want to be there for what should be a fantastic occasion.”

In any event, Celtic fans are liable to be more concerned with their side’s Scottish FA Cup final against Hearts next Saturday at Hampden Park (kickoff 3pm) and their bid for an historic “treble treble” on the same day.

One man will be supporting both Celtic and Glasgow in Saturday’s two finals in the city will be Jim Craig, a Lisbon Lion whose son, James, played for Glasgow on the wing and won four caps for Scotland around the turn of the millennium. Alas, Craig is one of those who took umbrage over Cullen’s remarks.

“It’s nonsense, like a lot of things like that. But you’ve got to put up with it. If I ever meet Mr Cullen I’ll have a private word with him. He got publicity over his words, and maybe that’s what he was wanting,” said Craig, which, of course, is the last thing Cullen would ever seek.

“It’s very curious. In my own background on one side I’m an obvious Scot, the Craigs, but on the other side I have Irish background – but it’s from Ulster and Connacht, not from Leinster. I don’t think my antecedents would necessarily be supporting Leinster anyway. They would have been supporting Ulster last weekend, but that wasn’t a very good day for them,” said Craig, who nonetheless said he was pleased to see the final in Glasgow.

Asked if he hoped the whole of Glasgow can support this final, Craig said; “We’re hidebound by tradition, aren’t we? When I was a kid, unfortunately there was a religious bias against people of my religion playing for Rangers. Thank God, thanks to the unlikely source of Graeme Souness, that all changed, and now Rangers will sign anybody, and it doesn’t make the slightest difference where they come from.

“In my own case, my four sons and my daughter were all Catholics, but they all married non-Catholics. So what’s the difference? I’m from a non-Catholic background, my father was a convert, and it didn’t make the slightest difference. All my cousins are great, I love them very much and it has never made the slightest difference to me. If people could just treat it like that the world would be a better place.”

As for the match itself, Glasgow were not remotely rusty in filleting Ulster by 50-20 in last Friday’s semi-final, their first game in three weeks, on foot of which Rennie maintained they can still improve considerably.

“The scoreline obviously looked good, but Ulster are a lot better than that. They were probably a couple of cogs off where they would normally be – not too dissimilar to what happened with us against Saracens in Europe a few weeks ago. If you’re a couple of cogs off, then you can get belted. That’s the way the game is.

“We’ll be better for the hit-out because we hadn’t played in three weeks. I still think we can be better defensively, although we did actually defend well for big chunks. In attack I thought we were pretty clinical. But I still believe we can generate quicker ball. We’re always striving to be better – and we know we’ll have to be against Leinster.”

Glasgow emerged unscathed from their semi-final, with Rennie welcoming the additional day’s preparation. “That eighth day is crucial to be honest.”

“We’re not going to over-train. It’s just a case of being clear and doing what we need to do. We also need to make sure we have a bit of fun, because that’s really important in a week like this. We’re excited. At this stage of the season a lot of people get a bit nervous and play within themselves. They maybe play conservatively as a result of that.”

“But what’s got us here is the brand of footie we play. I was really pleased with our attitude against Ulster because we really went out and expressed ourselves. We want to do the same in the final.”

Rennie reckoned their 39-24 win at the RDS five weeks ago counted for nothing, and said of the defending champions: “They’re a good side who are generally tough to beat. Saracens threw everything at them for a long period and they stood pretty strong for a big chunk of that game, so we know what’s coming.

“They’re notorious for hanging on to the ball multi-phase, so you can’t turn over the pill against them or kick poorly. And they’ll defend well, as we saw against Munster on Saturday. I’m sure they’ll be highly motivated. They’re very aspirational, and they’ve missed out on one trophy, so I’m sure they’ll be determined to grab the other one.”