All four Irish provinces have qualified for Pro14 playoffs, but no Welsh side in last six 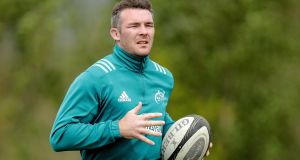 On March 16th, as we all know, Wales sealed the Grand Slam with that 25-7 win over Ireland at a packed Principality Stadium. Well deserved it was, too. Six weeks on, though, and a couple of ensuing events underline how, in truth, Irish rugby remains in a way healthier place overall.

All four Irish provinces have qualified for the Guinness Pro14 play-offs, with two, and probably three, in the semi-finals. By contrast, for the first time ever and despite an expanded play-off structure in the last two years, no Welsh side has reached the last six.

On foot of this, Leinster have signed the current Welsh forwards coach Robin McBryde from next season onwards after John Fogarty moves on to work with the IRFU and Ireland.

McBryde looks like another shrewd acquisition and, no less than pinching Dan McFarland from Scotland, another very Irish coup. Given the coaching experience he has developed over the last 13 years, à la Simon Easterby with Ireland, Leinster’s gain is Wales’s loss, for McBryde could surely have been an invaluable addition to any of the four regions.

In seeking to keep their frontline internationals at home, the IRFU and the provinces place a premium on player welfare and ensuring they remain competitive on all fronts, so that the players believe they have a chance of winning trophies. To that end, the IRFU and David Nucifora have long since placed a premium on acquiring the best coaching from around the rugby world.

They don’t always get it right but, for the most part, they have succeeded, and when they get it wrong they generally quickly atone – witness McFarland and Andy Friend, both of whom already look like shrewd pieces of business as they prepare to face each other in Saturday’s intriguing Ulster-Connacht quarter-final.

Acquiring Rassie Erasmus was also something of a coup for Munster and the IRFU, and, after he took over the Springboks, the less high-profile choice of Johann van Graan already looks like a clever appointment.

The Scots have sought to emulate this approach – witness the appointment of Dave Rennie at Glasgow, and Richard Cockerill at Edinburgh

Above all of them, of course, is an Irish ticket headed by Joe Schmidt featuring the former English defence coach Andy Farrell, the former Scarlets assistant and head coach Easterby and, until the World Cup, Greg Feek.

The Scots have sought to emulate this approach – witness the appointment of Dave Rennie at Glasgow, and Richard Cockerill at Edinburgh. But, apart from Wayne Pivac, the WRU and their regions seemingly don’t place as much store in hiring high-calibre coaching, instead placing a greater premium on signing overseas players.

What Warren Gatland has achieved over the last dozen seasons in tandem with Shaun Edwards, Rob Howley and McBryde – and certainly so this season – is in spite of rather than because of the professional system which underpins the national team.

Perhaps that partly works to their advantage in that the players are less emotionally and physically drained by the kind of big games which the Irish players are involved in, especially when you think all four provinces also qualified for the knock-out stages in Europe whereas, again, no Welsh team did.

Ironically, that there was comparatively less drama in the final round of Irish derbies – though well attended by combined crowds of 37,357 – was largely because all four had already secured their place in the knock-out stages, with three of them knowing their fate. Only Munster had something tangible to play for, and that quickly ebbed away due to events in Glasgow.

By contrast, in the first leg of Judgement Day VII, Matthew Screech’s second try late on and Jason Tovey’s conversion completed a remarkable 34-32 win over the Scarlets, which was followed by the Ospreys’ 26-23 win over Cardiff courtesy of Sam Davies’s late penalty.

The crowd of 51,297 underlined the continuing success of this annual double-header in the Principality Stadium, although it was the lowest since Judgement Day III and more than 11,000 down on a year ago.

Those results meant the Ospreys – eight weeks after the rumoured merger with the Scarlets was scrapped and a humiliating 46-5 loss to Connacht left them eight points adrift of fourth-placed Cardiff – have earned at the very least a home play-off to qualify for next season’s Heineken Cup.

The interpros have a much richer history, and they were jettisoned a mite too readily

As things stand, that will be against the Scarlets. But both Welsh sides will be cheering for Leinster on Saturday week against Saracens as this, coupled with Clermont (second), La Rochelle (sixth), Harlequins (fifth) and Sale (sixth) finishing in the top six of the Top 14 and Premiership, would result in an eighth qualifier from the Pro14. Hence both would play in next season’s Champions Cup.

One final thought. Given the meetings between Glasgow and Edinburgh have the additional prize of a trophy, namely the 872 Cup, why not revive the Interprovincial Championship with a trophy as well?

The interpros have a much richer history, and they were jettisoned a mite too readily. Had there been a separate trophy for the interpro champions as well, Leinster would now be three games away from completing back-to-back trebles, for, despite their defeat in the Kingspan Stadium last Saturday, their losing bonus point would have been enough to secure the title on 19 points, one clear of Munster on 18, with Connacht on 11 and Ulster on nine.

However, it would have given added interest to the respective endgames, as a fourth try and a bonus point for Munster against Connacht would have seen them finish above Leinster on points difference.