‘This has to be clear. Johnny was not dropped,’ says Contepomi 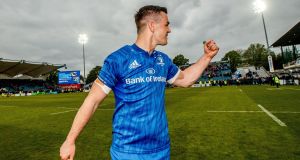 Leinster’s Johnny Sexton celebrating after the Pro14 semi-final against Munster at the RDS. Photograph: James Crombie/Inpho

Felipe Contepomi provided context to Leinster head coach Leo Cullen’s post-match observations in which he expressed his disappointment about what he considered “nasty” headlines with regard to team selection ahead of the Munster match last weekend that suggested Johnny Sexton – Ross Byrne started and the Leinster captain was on the bench – had been dropped from the team.

Leinster backs’ coach Contepomi said: “This has to be clear, Johnny was not dropped. If that’s the way people want to see it or say it, [it’s] a perception or something that someone says from outside. We, and when I say we, it’s not only the staff but the players as we all want the best for Leinster, and Johnny demonstrated how great a team player and leader he is because he is the captain of the team.

“Coming back from a very [bruising] 80 minutes in the Champions Cup and all before [when] he was injured. We thought and everyone agreed that maybe the best thing for him was to come off the bench and be fresh or as fresh as possible.

“He showed, his show and go and break, and I think sometimes... I’m not saying journalists but you want to have a headline of ‘Jonathan Sexton dropped’. We don’t drop him, we all agree and are in the same boat, and Johnny is one of them.

“He showed it, his attitude was fantastic throughout the week. His input for the team, for Ross, and his mindset to come in and do the best for the team, that’s what he did.”

Devin Toner, meanwhile, will miss Saturday’s Pro 14 final against the Glasgow Warriors at Celtic Park due to a knee injury he sustained against Munster at the RDS on Saturday. The prognosis is that he will be out for four to six weeks, but that the issue will not affect his World Cup prospects. The Leinster and Ireland secondrow will have a further medical assessment this week.

Man of the match in the Munster game, Josh van der Flier, came through his first game since groin surgery without any issues.

Rob Kearney picked up a knock to the head at the end of the Champions Cup final defeat. He has passed all the return-to-play protocols, and will be available for selection ahead of Saturday’s match, although Sean O’Brien’s injury issue is less clear-cut.

Contepomi said: “Sean O’Brien, he’s recovering from a hip problem or injury. He’s working hard to be selectable and Rob [Kearney] had that return-to-play [protocols]. He is training today [Monday] and should be selectable.”