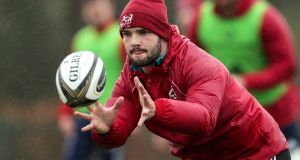 Ulster have confirmed the signing of outhalf Bill Johnston from Munster. He was a key member of the Ireland side that reached the 2016 U20 World Championship final, scoring 11 points in the comeback victory over Wales and another 10 in the historic win over New Zealand before being invalided out of the tournament in that match when he dislocated his shoulder in a tackle.

The 22-year-old playmaker was given his Munster debut in March 2017 and has made 12 senior appearances, scoring 29 points. Johnston said he’s looking forward to linking up with his new colleagues: “I’m an ambitious player and this is a great opportunity for me to test myself in an exciting new environment and develop my game under Dan [MCFARLAND]and the other coaches.

“Ulster has a talented young squad that is hungry for success and it’s an organisation that’s clearly moving in the right direction. That’s something I really want to be part of and I can’t wait to make the move to Belfast and get stuck into pre-season training.”

McFarland commented: “Bill is a very exciting young prospect who, for a number of reasons, has had limited playing opportunities over the past couple of years. He obviously feels now is the right time for a new challenge in his career and he will bring enthusiasm and unquestionable talent to our squad. We’re confident that he’ll be a really good addition.”