Most consistently dominant forces in Europe have proven their worth repeatedly 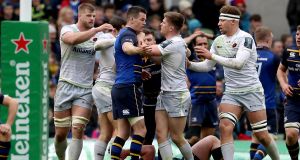 Next Saturday’s Heineken Champions Cup final isn’t so much a case of two tribes going to war, more two machines finally colliding in the biggest Northern Hemisphere club match of the year.

Leinster and Saracens are the two best sides in Europe because of what underpins them, and is also the product of years rather than a season’s work, and so it has come to pass that two true Euro superpowers will go head to head in St James’ Park.

This feels epic, with a fittingly titanic tussle in Newcastle between two sides who have been, without doubt, the two most consistently dominant forces in Europe and domestically for much of the last decade.

Leinster have not only won four Heineken Champions Cups in the last ten years, but have made the knockout stages in all but two of the last 11 years, reaching the semi-finals or better eight times. Even in one of their two pool exits they extracted some compensation by winning the Challenge Cup.

They’ve also won what is now the Pro14 five times, and in the ten seasons since the play-offs were introduced, Leinster have only missed out once, reaching seven of the last nine finals and winning three of them.

True to the Champions Cup storylines, and akin to Leinster, Saracens suffered plenty of pain en route to also becoming a Euro superpower. There was a European sequence of a quarter-final, semi-final, final and another semi-final in successive seasons before the first of their back-to-back trophies in 2016. Hence, they are in the knockout stages for the eighth year in a row, the last four six times and their fourth final.

Domestically, Saracens have already secured their place in the Premiership play-offs for the tenth season running. They have reached six of the last nine finals, winning four of them. They haven’t gone a season without a trophy for the last four years.

The two clubs are very similar, and yet they are very different.

They are envied, yet one ventures Saracens are more disliked, particularly so by the other English clubs, which merely serves to strengthen their ‘no-one likes us but we don’t care’ mentality.

Witness how Billy Vunipola was portrayed as a victim in the build-up to the Munster semi-final for his support of Israel Folau’s homophobic tweet and Vunipola’s own social media post, after which Mark McCall reckoned he’d never seen the playing squad tighter.

Ever since Nigel Wray became Saracens’ main financial backer in 1995, and they recruited the likes of Michael Lynagh, Philippe Sella and Francois Pienaar, the club have always had money and marquee signings.

But they became a different proposition in 2008 when 50 per cent of the club was bought by a South African consortium and all changed utterly when Brendan Venter became their director of rugby in 2009.

Within 48 hours of his arrival, 18 players were culled in what became known by the fans as “the night of the long knives”. Thereafter their squad has always had a strong South African connection, which led to the moniker “Saffracens”.

Mark McCall was co-opted onto the coaching team for the 2009/10 season as first team coach, and after Venter left midway through the 2010/2011 season he took over, maintaining much of Venter’s approach as the latter maintained contact with the club.

In that 2010-11 season, they avenged a last-ditch 33-27 defeat by Leicester the year before to beat the Tigers 22-18 at Twickenham – Owen Farrell kicking six from six in a 17-point haul – and haven’t looked back.

Under Venter and their then long-serving CEO Edward Griffiths, Saracens changed their direction, assuming a certain mentality which many on the outside have seen as arrogant.

Saracens have long since been a mouthier team than most on the pitch, witness the way Maro Itoje in particular loudly hails decisions going their way or pats opponents on the head. They certainly seemed to antagonise Glasgow in the quarter-finals.

But the main reason they are disliked is due to the sources of some of their funding and the suspicions that they do not adhere to the salary cap. Saracens have already escaped with light censure for a previous breach of the salary cap, and are currently under investigation again after it emerged that, in addition to their salaries, Wray has property investment deals with several leading players.

But they’re also known for their support of players’ families, and helping with post-career qualifications.

Whereas Leinster, as the only club based in a capital city, can ride the crest of an increasing wave of supporters, Saracens, with such a tiny following, draw on other methods of strengthening their Us-Against-the-World mentality, such as their mid-season bonding trips.

The squad have been to the ski resort of St Anton in Austria, New York, the Swiss ski resort of Verbier, Rimini in Italy, Miami, Munich, Hamburg, Cape Town, Abu Dhabi, and other places.

But there is substance to what they do, and akin to Leinster, Saracens are built on firmer foundations now compared to the early Wray years. Under Venter, Saracens fostered their famed ‘wolf pack’ defence, and the baton has been passed on from Andy Farrell to Paul Gustard to Alex Sanderson.

In this they have placed a greater premium on high quality coaching, from their academy up, and developing players from within.

This, according to Stuart Lancaster, is evident in the way so many of Saracens’ leading young lights graduated to the English team under his watch.

Further evidence of this was provided last Saturday when their starting XV for the semi-final against Munster were rested and they delved into their academy. There was a Premiership debut for the 18-year-old Manu Vunipola, cousin of Mako and Billy, and other stars of the future as they beat a second-string Exeter 38-7 (and with 32 per cent possession and 28 per cent territory).

It was almost Leinster-esque. Truly, it’s hard to think of a final quite like this one. And it may not be the last.