Can Leinster’s try-scoring troika repeat their feat at Celtic Park? 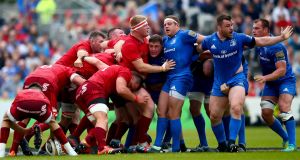 Time will add lustre to the moment, but there are sufficient kudos being dispensed at the moment from several sources in celebration of Leinster’s opening try in the 24-9 victory over Munster in the Pro14 semi-final at the RDS last weekend to satisfy all concerned.

Many hands made the work light, so to speak, but it was three pairs in particular that caught the eye. The frontrow generally get through a mountain of work unencumbered by praise, their toil generally filed under the catchall “performing the basics”, so when Cian Healy, Tadhg Furlong and the eventual try-scorer Sean Cronin combined in sequence outside their traditional catchment area it was unlikely to be glossed over.

It’s a straight drill that we do in training. It’s pretty good to see it being directly transferred into a game

It was the quality of their work that drew admiring reviews, running at inside shoulders, passes out in front and timed nicely. They’re all accomplished players so it’s hardly a surprise, but they had never previously combined in unison in that fashion, as Healy confirmed: “Not with the three of us, at least we are doing something there from training.

“It’s a straight drill that we do in training. It’s pretty good to see it being directly transferred into a game. I enjoyed that. I didn’t have the energy to celebrate like Tadhg, but I enjoyed it.”

So was there any trash talking with the backs?

“No, we won’t go that far; take the bit of credit we got in the meeting and shut up for a while.”

Leinster backs coach Felipe Contepomi explained that it was the product of a drill that the whole squad work on repeatedly in training.

“I think, definitely, it was a great try and not just because of that masterpiece of the front-row and Fogs’ [Leinster scrum coach John Fogarty] job of teaching them how to pass.

“It was Leinster rugby at its best as it started with a driving maul. When we got a penalty we took the advantage play, wide into the channels and then some of our backs do what our forwards normally do, and when we saw space out wide, the front row play, that beautiful straighten-up, squaring-up and short-pass rugby.

“I’m not surprised, as we trained that way, and today I was telling the backs, that front row action is exactly the same exercise that Stuart [Lancaster] does with all the team of coming around the posts and squaring up. When you see it happening you realise and understand why we do things in training. It’s to actually do things on game day.”

The challenge for Leinster going into the Munster match was as much mental as physical, and pushing to one side the frustration of the Champions Cup final defeat to Saracens. Healy admitted that the traces of disappointment would resurface unsolicited periodically.

“It was tough. We turned the page quickly in here and got moving on the week. It was creeping up on me during some basic stuff, cooking dinner, thinking about the ‘what ifs’, which you have to slap out of your head a bit and stay focused. No, [it] probably just showed me that it did hurt. I don’t want it to happen again.”

Another week and one final task, literally: a Pro14 final against the Glasgow Warriors at Celtic Park on Saturday. The Scottish side have had Leinster’s measure in the league this season and made short work of Ulster’s challenge in the semi-final.

Healy said: “They are very dangerous, their scrum is pretty testing and the breakdown is a huge part, they’ve got dangerous men over the ball. You’d know the main threats and when I go over the video of them and we have our squad review, we’ll start finalising that and figure out what their threats are going to be.

“It’s a different ground, I don’t think they’ve played there, we haven’t played there, so it’s kind of open territory. Their support will be big enough but the travelling support we have in incredible. Going into that Champions Cup final was one of the greatest things I’ve ever seen, that’s something I’ll never forget.”

A number of players leave Leinster at the end of the season and, in Jack McGrath, one to whom Healy is close and who drives the Clontarf man on to be a better player. “Jack and I are tight. We’ve worked together, battled together and gone head-to-head for shirts. The pressure from each other pushed us on and we probably achieved things we wouldn’t have achieved without each other.

“It will be tough not seeing him; we sit beside each other in the changing room. It will be tough not having him there, Seánie [O’Brien] and the lads. There’s a great group of lads that are leaving but they’re going on to pursue other things, so we want to just finish as strong as possible and send them off with good memories.”

1 Keith Duggan: Through the glories and the disgraces, we were all Maradona addicts
2 Diego Maradona dies of heart attack, aged 60
3 Rugby Stats: Blame game at lineout time is on the whole team
4 All bets are on as America opens the gambling sluice gates and the dollars flow
5 Andy Farrell to delve deeper into Irish squad for team to play Georgia
Real news has value SUBSCRIBE

Diego Maradona dies aged 60; can Cavan’s kickouts do for the Dubs? 07:48
Joanne O’Riordan: Peamount show their pedigree as they prove themselves again 06:37
Fear won’t be a factor as Waterford get their licence to thrill 06:00
Limerick’s O’Donoghue wishes it was comrades all on the road to Croke Park 06:36
Sonia O’Sullivan: A lost season for Irish athletes in the springtime of youth 06:00
Here is your handy guide to sport on television this week