Cullen wary of having to play catch-up against formidable Saracens 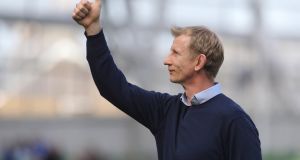 Leo Cullen celebrates Leinster’s win over Toulouse: “They [Saracens] are going to be a real handful but what would you expect at this stage of the competition. . . .They were seeded number one, so they’re in the final for a reason.” Photograph: Lorraine O’Sullivan/PA

This year’s Champions Cup final will be contested between two sides who like to dominate possession and territory, while playing on the front foot and usually when in front.

For the fourth year running, the two teams that led at half-time went on to win the semi-finals. In the last 16 finals, only three times has a team come from behind at half-time to lift the trophy although, were they to trail Saracens at St James’s Park in three weeks’ time, Leinster could take encouragement from having done so in two of their previous four finals.

In 2009 they trailed Leicester 13-9 at the end of the first-half in Murrayfield and came back to win 19-16 for their breakthrough success, and in the most memorable comeback of all in 2011 at the Millennium Stadium, when inspired by Johnny Sexton, they recovered from a 22-8 half-time deficit against Northampton to win 33-22.

Nevertheless, one always felt that if Munster fell two scores behind in the Ricoh Arena on Saturday it would be an almost impossibly long road back given the way Saracens up their defensive line speed when ahead.

In the aftermath of Leinster leading from the 14th minute to the end against Toulouse, Leo Cullen clearly feels that the hardest team to play catch-up against is Saracens.

Recalling last season’s quarter-final between the pair at the Aviva Stadium, when Leinster led from Garry Ringrose’s third-minute try before pulling clear in the third quarter, Cullen said: “We got a good start that day which helped, I think, because when Saracens get a good start they’re a very tough team to play against. It’s hard chasing the game against them.

“How you start the game is important. We got off to a reasonably good start against Toulouse which was good and everyone gets into the groove of the game. It can be hard to play catch-up in some of these finals.

“You never know what way the game is going to be. Racing were such a quality team in the final last year. There was rain; we all thought Bilbao would be like Saturday with the sun shining and 25 degrees, but in reality it was raining and it made it a cagey game.

“There’s no guarantee as to what game it’s going to be. We need to prepare for lots of different eventualities. That is what is involved at this time of year, because adaptability is hugely important to win big games. You can go through 100 bigger pictures, but none of them might appear in the game.

“For us, the experience of the group is important and guys are still hungry to be successful. You go through the season and at the end of the season you realise guys are moving on at the end of these games, so everyone works very hard to ensure that everyone gets the send-off we’d like to give people who have given a huge amount to the club. It’s a great challenge.”

Saracens are back in their fourth final in six seasons and arrive so additionally motivated given Leinster denied them the chance to win a third cup in succession last season when beating them in the quarter-finals.

“I think when a team loses in a competition when they’ve won it previously it just drives greater desire usually,” said Cullen.

“Yeah, they’re going to be a real handful but what would you expect at this stage of the competition. There’s a lot of really good teams in Europe. They were seeded number one, so they’re in the final for a reason. They’ve probably been the most consistent team in the competition so far.”

Cullen admitted it’s been a tougher route to the final this season, compared to last, but they are now seeking to break even more new ground in securing a record fifth Heineken Champions Cup and become the first side from any country to win back-to-back doubles.

But as to whether they were now entering era-defining territory, Cullen said: “I don’t know. That is probably for someone else to decide. We’ll just go about our business.”

Although Saracens have consistently used their us-against-the-world mentality when usually having less support in big cup ties at neutral venues, Cullen maintained Leinster will be inspired by their travelling Blue Army in Newcastle.

“We want to represent the province well. It was eerily quiet around the streets of Dublin the last couple of days. I was literally thinking to myself ‘where are they going to find 40,000-plus people to go to this game?’ Because there was nobody around.

“But, it was great for us to get that crowd. It is such a tricky time of year, Easter Sunday. Happy Easter to all. Hopefully it was worthwhile and, hopefully, we will get a huge crowd to Newcastle.

“The memories that players have driving into the ground, seeing the blue flags everywhere; I can vividly picture a sea of blue as we drove in under the stadium in Bilbao. They are amazing days for players to be involved in. It is this weight of support, this momentum, when you think everyone is behind you.

“It is powerful stuff. Players feed off that and they understand what it means to, not just our group, but to lots of other people as well. We’ll do everything we can. We’ve just got to knuckle down now, come up with a plan, deal with Ulster first on Saturday and then work really hard to make sure we are best set to give the best account of ourselves.”

Having already secured a Pro14 home semi-final and so bypassing the quarter-finals the weekend after next, Leinster only have next Saturday’s game away to Ulster between now and the final with which to keep players ticking over or rest them up for two weeks. The extent of Sean Cronin’s injury should be revealed today.

2 Chelsea win at Liverpool to move into top four