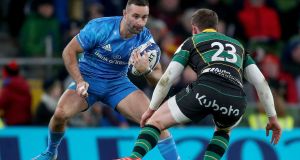 Andy Farrell’s icebreaker or “stocktake” to give the official title to the 45-man Ireland squad that congregated over a two-day period prior to Christmas at the National Sports Campus was more of an orientation process as the new national head coach and his backroom team offered some outline plans for the upcoming Six Nations Championship.

Rugby was quite light on the agenda but there was enough to discern that Ireland’s attacking shape is going to change; to what extent from Joe Schmidt’s regime will be fleshed out more fully over the coming weeks in the build-up to the tournament start in February.

Dave Kearney enjoyed the experience discovering a less intense atmosphere although that may be partially attributable to the nature and timing of the two-day camp. He explained: “I guess guys react differently to those sorts of environments depending on a player’s personality.

“Some people don’t like that really intense environment where every mistake you make in training or in meetings or anything like that is scrutinised. Players react differently. I think going forward [it’ll be] a more relaxed environment, less intense. Every player is going be able to express themselves a bit more.

“The atmosphere was good. We’ll be playing a different game than what we were used to so that is exciting. Like anything new, there are always nerves there because everyone wants to get picked. But there’s excitement because it is new and everyone wants to be a part of it.

“We didn’t really do that much rugby wise, more our general shape and getting guys up to speed. There are a few things that the coaches want to change. It’s making sure that everyone is on the same page. You have new faces coming in there, lads who have never really been around that environment or met some of the coaches. It’s obviously important for them too.

From what he could glean in the brief pitch session, the broad brushstrokes of Ireland’s attacking patterns will be tweaked to make them more expansive. “I think so, I’d say so, yeah. It’s probably similar to the way that we play here [in Leinster] I guess.

Farrell’s regime includes a new backs coach in Mike Catt, the South African-born, former England World Cup winner, who most recently fulfilled that role with Italy. Kearney said: “Mike is really good, seems like a really nice guy. Obviously I’d never met him before. He took the meeting in the morning which was good but otherwise it’s hard to say because we didn’t do a whole pile of work.

“But there was a bit of shape work in the afternoon. I’d say he’ll be working on a lot of skills stuff, not just with the backs but with the forwards too; working on the basics of the game.” The eagerness to impress meant that Farrell and Catt had to interject on a few occasions to tell the players to dampen down the enthusiasm levels a notch or two.

The only downside to the Irish camp was the absence of his brother Rob. “Obviously it is tough for him and I know how it feels [to be left out]. It’s tougher for my parents; they are congratulating one but not the other. Rob is still playing well, he’s still fit and he still feels good. I don’t think that it is a closed book for him. Lots can happen, there is still a lot of rugby to be played and I think he can still easily get back in and push forward again.”

Dave Kearney won the last of his 19 Ireland caps during the summer, playing in two World Cup warm-up matches – he scored a try, his fifth for his country against Italy – but didn’t make the squad that travelled to the tournament in Japan. Four years previously he was a first-choice wing during the World Cup but injury and form saw him add just three caps prior to this summer’s recall.

He’s been in excellent form for Leinster this season, six tries in seven appearances – one of those was just a three-minute cameo as a replacement against Lyon – and three starts in four matches in the Champions Cup to date earned him recognition with the national squad.

There are three more Leinster matches coming up, starting with Connacht on Saturday at the RDS, and Kearney wants to be involved in every one, from both a Leinster and Ireland perspective.

1 Ken Early: Liverpool fans, Bamber Gascoigne and a close shave in Istanbul
2 As news gets better, can the pull of The Field be resisted?
3 The Offload: Philip Browne’s grave outlook should be taken seriously
4 Sideline Cut: Vignette shows why Bird is the true shark in The Last Dance
5 From TB to polio: GAA is no stranger to disease disruptions
Real news has value SUBSCRIBE

Premier League must share wealth to ensure English football’s survival 10:54
All in the Game: Did Rory Delap’s long throws cause the 2008 financial crash? 10:00
The Offload: Philip Browne’s grave outlook should be taken seriously 10:00
Cricket ban on using saliva to shine ball will only be temporary 08:41
UK government says elite athletes must be allowed to opt out of contact training 08:14
Here is your handy guide to sport on television this week