Ulster outmuscle Connacht to get back to winning ways 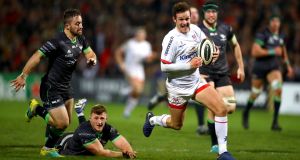 As expected, Ulster got back to winning ways in front of the Kingspan faithful and stretched their unbeaten home record to 18 games when scoring five tries to claim a bonus point win over Connacht.

Tries from Alan O’Connor, Billy Burns, Robert Baloucoune, Rob Herring and Nick Timoney swept Connacht aside with all the scores converted, four by John Cooney and Timoney’s late effort by Bill Johnston on a night to forget for Andy Friend’s team.

The result meant that Dan McFarland’s side are now unbeaten at the Kingspan in 18 games played in Belfast. Quite an achievement and the feeling is that more is to come.

Ulster led 14-3 at the break after managing to take their chances, via scores from O’Connor and Burns, while Connacht had blown two of their own with Caolin Blade and replacement Stephen Fitzgerald failing to get downward pressure when over the line.

The failure of Friend’s side to take their chances or turn pressure into points when they were on the front-foot in the first half cost them dearly, allowing Ulster to keep their line intact, regroup and then pick them off with Will Addison looking particularly sharp.

The final game of the year saw Connacht come to Belfast more in hope than the expectation that saw them beat Ulster in both regulation games of last season, their Kingspan result, of course, ending nearly 60 years of hurt when it came to playing north of the border.

Friend’s side looked somewhat underdone what with no Quinn Roux to add to an injury list which includes Kieran Marmion and Jarrad Butler. Matt Healy then withdrew prior to kick-off with Kyle Godwin starting on the wing.

The game started with the visitors struggling with John Cooney’s initial high kicks and then when Addison, on his return from suspension, ran back Conor Fitzgerald’s kick to chip and put Robert Baloucoune away down the right wing it looked like it might be a long evening for Connacht.

Only the fact that Addison’s off-load to Baloucoune had been forward prevented Connacht from conceding after nearly four minutes.

Connacht got entry to the game after Marty Moore was pinged for not releasing in the ninth minute. Dave Heffernan’s break from a subsequent driving maul had seemingly resulted in a try after Blade dashed over only to be held up by Baloucoune and Marcell Coetzee, BUT they had to be content with a Conor Fitzgerald penalty three minutes later.

Ulster then sprung into life and with Blade being penalised for killing the ball, the northern province went for the corner. They threw long to Kieran Treadwell and though Joe Maksymiw got up in front of the Ulster lock, the ball wasn’t tidied up, allowing O’Connor to pounce for a soft try.

Cooney converted and Ulster were four points in front without really having settled into the game.

The home side profited again from another high kick with Tiernan O’Halloran unable to collect. They moved it right and Baloucoune made ground again before linking with Sean Reidy who fed Billy Burns.

The outhalf didn’t seem likely to make it but somehow, despite a hand-trip, he made it to the line with O’Halloran unable to hold him up. Cooney converted but Ulster then worryingly lost Coetzee after what appeared to be a no-arms hit from former Kingspan player Paddy McCallister.

Shortly afterwards Connacht saw both McCallister and Finlay Bealham leaving the action and yet they were the ones who finished the half deep in Ulster territory.

Again, though, they failed to make it count and came away with nothing from over 30 phases near Ulster’s line, Rob Herring sin-binning for seemingly not rolling away and Stephen Fitzgerald failing to touch down a Conor Fitzgerald cross-kick.

Four minutes in to the send half and they had their third try when Addison’s half-break enabled Cooney to feed Timoney whose swift pass to Baloucoune saw the winger surge over. Cooney’s conversion made it 21-3 as Herring trotted back on meaning that Ulster had won the sin-binning 7-0.

It looked to be a crucial blow for Connacht and it was no surprise that the bonus point score soon followed with Herring getting it after a penalty to the corner had been won by Treadwell before the Ulster skipper peeled off to smash over.

Cooney did the needful for his fourth conversion from four and Ulster now led 28-3.

Connacht replacement hooker Shane Delahunt was sin-binned with less than 20 minutes to go and though Ulster failed to score while the visitors had 14 on the field with Timoney crossing with four minutes to go which Bill Johnston converted.

Brendan Rodgers says he was ‘really knocked’ by coronavirus 19:02
GAA preparing for earlier return to activity but pitches to remain closed 18:07
HRI announces full jumps programme up to start of August 17:03
La Liga season to restart on June 11th with Sevilla-Real Betis derby 16:26
Liverpool and Everton to oppose plans to play games at neutral venues 17:18
Here is your handy guide to sport on television this week