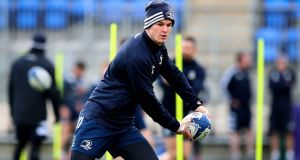 Johnny Sexton is recovering from a knee injury sustained during Leinster’s Champions Cup win away to Northampton. Photograph: Ryan Byrne/Inpho

Johnny Sexton’s potential return to Leinster colours is still unknown despite the fact “his rehabilitation from a knee injury is going well,” according to a medical update from Leinster.

He will be “reviewed again later in the week regarding the next steps.” Sexton sustained the knee injury in the first Champions Cup game against the Northampton Saints and was withdrawn shortly after half-time.

The medical prognosis at the time was that he could be fit for the start of Ireland’s Six Nations Championship campaign.

Centre Rory O’Loughlin had a procedure on a shoulder injury and will be sidelined for 12 weeks while prop Michael Bent picked up a calf injury in training.

Jamison Gibson-Park, who withdrew on the day of the Munster match through illness, has recovered and will take a full part in training this week ahead of the Guinness Pro14 game against Connacht at the RDS on Saturday (5.30).

Joe Tomane also returns to full training with Leinster this week having recovered from a hamstring injury.