Paddy Jackson injured as Bath clean up against London Irish 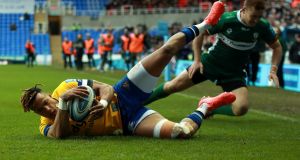 London Irish fullback Paddy Jackson pulls up with a hamstring injury as Bath winger Anthony Watson dives over to score their second in the Gallagher Premiership match at the Madejski Stadium in Reading. Photograph: David Rogers/Getty Images

Paddy Jackson limped out of the game in the first quarter with a hamstring injury as London Irish suffered a heavy 38-10 defeat at the hands of Bath in Sunday’s Premiership match at the Madejski Stadium in Reading.

The former Ulster and Ireland outhalf, who started at fullback, lasted just 12 minutes before succumbing to the injury while trying to defend Bath’s second try from England winger Anthony Watson. And things got worse for Declan Kidney’s side when Tom Fowlie failed his head injury assessment just four minutes after coming on as a replacement in the first half.

That match was good as over by the interval as the visitors established a 31-3 lead thanks to scores from Beno Obano, Will Chudley, Watson, Semesa Rokoduguni and a penalty try.

Tom Homer also went over early in the second period for the west country side, with Irish’s sole try coming from Adam Coleman once Bath had finished their scoring.

Bath’s third win of the season lifts them up to seventh in the Premiership, leap-frogging above Irish who drop to ninth.

Obano got his side up and running with their opening try inside four minutes, the prop getting the final touch after a number of pick-and-goes a couple of metres out.

A loose ball was smartly hacked upfield by the England winger, allowing him to slide over from a yard out and extend the visitors’ lead to 12 points.

A solitary penalty from the unusually quiet Stephen Myler was all Irish had to show for their first-half efforts, which were no match for a Bath back division which had it all their own way.

Rokoduguni added a third try with just over a quarter of the game gone, dotting down in the corner after skipper Priestland moved the ball wide from a mass of bodies under the posts, and the bonus-point try was not far behind.

A speculative punt into the Irish 22 by Rokoduguni was met by a dithering James Stokes – the fullback enduring a difficult debut after coming on for Jackson following his move from Championship outfit Coventry in the week – and Homer pounced on the ball at the 28-year-old’s feet.

With Jamie Roberts then waiting to simply drop over the line, Albert Tuisue was left with little choice but to pick off Chudley’s short pass, despite coming in from a clear off-side position.

Referee Karl Dickson, in collaboration with TMO Sean Davey, did not have to consult long to come to their decision, with the Fiji number eight given 10 minutes in the sin-bin and Bath awarded a try.

Chudley then scored the pick of Bath’s tries as Irish threatened to completely unravel, with Jonathan Joseph instigating a wonderful, flowing move.

The England and Lions centre – a former London Irish player – was also at its conclusion, offloading out of the tackle to allow his scrumhalf to scamper over unopposed for a fifth Bath try inside the opening half-hour.

The climax to a poor afternoon for Myler was capped soon after the re-start when an attempted crossfield kick was sliced.

It could not have bounced kinder for Homer, who went the full distance from just inside his own 22 to increase the visiting side’s lead further still.

Coleman’s effort was as much as Bath’s festive spirit was willing to yield and even after the away side lost Christian Judge to the sin-bin for a dangerous tackle, they kept Irish at arm’s length.