Gerry Thornley at the Sportgsround 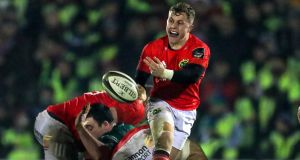 Munster scrumhalf Craig Casey in action during the Guinness Pro 14 game against Connacht at the Sportsground. Photograph: Billy Stickland/Inpho

All was set fair for a big night in the Sportsground for Connacht, where the majority of a capacity 8,129 crowd came in anticipation of a home win in this Conference B summit meeting that would have put them first going into the second round of festive derbies.

However, as Andy Friend was the first to concede, far from rising to the occasion Connacht’s performance came up short.

“There were patches but in between those patches there was a lot of error,” said the head coach. “We just talked about it, you can’t give any side – let alone a Munster side – the access that we gave them into our 22. Our inability to exit, our inability to fire shots when we had ourselves in good field position in the end was way too costly.”

Connacht had gone into half-time with the boost of a third penalty to trim Munster’s lead to 16-9 and feeling that they had plenty to work with.

“That’s exactly what we did do. From a defensive point of view I thought that we really fronted up. Our intent was great, so it’s not an attitude thing. It was just in attack we weren’t clinical when we got our chances.

“On the other hand, Munster were clinical. They didn’t get many chances but when they got them, there were clinical enough to get the win. So that’s something we need to fix, and fix pretty quickly.”

Every time Connacht built up a head of steam, an error or a penalty invariably deflated them almost as readily.

“We had a couple of ‘not straights’, we had a couple of big line breaks and then we turned the ball over,” admitted Friend. “We had a lot of error; the bottom line was way too much error and it’s something that we need to fix pretty quickly.”

Munster dominated territory and possession, and Friend added: “That’s down to the way we control footy, or didn’t control footy today. You know the type of game that Munster want to play. They’re very physical in the forward pack, they want to keep it tight and work you in ‘D’. When we did get opportunities we did open them up, but you can’t just open them up, you’ve got to be clinical and we weren’t.”

This defeat, only Connacht’s second since last January at home – when beaten 31-24 by Munster – in any competition, puts extra pressure on Friend’s team when they face Ulster (in six days) and Leinster away.

“Yea, you want to be winning interpros and you want to be staying at the top. I’ve just had a quick peek at some of those other scores there, and I don’t know where we sit to be honest with you but we need to keep winning.

All eyes go on Ulster now, a six-day turnaround and in the middle of that we’ve got Christmas. We do want our players to get away and enjoy some time with their families for Christmas but there’s a massive focus now on that trip up to Belfast.”

Jack Carty’s try did at least earn a bonus point which could be important.

“Yep, if you’re going to lose if you can get a bonus point that’s good, if you can get two it’s even better, but we only got the one. Yea, listen that’s probably the one thing at the end there, where you could see us trying to get that ball back and you’re just hoping the discipline is going to be good enough. But if we couldn’t get the ball back that we’re not going to lose that bonus point. So we were good enough to hold onto that, which is a very small consolation I suppose.”

By contrast, to come to Galway and earn the win which keeps them atop Conference B was all the more satisfying for Johann van Graan after Munster delved so deeply into their squad.

“We’ve got 18 guys not available for selection tonight, for various different reasons. We as a group said that you have back your performances up after Europe. We had to massive weeks against Saracens, two big battles and the team know how good Connacht are here,” said Van Graan.

“They haven’t lost here for a very long time and even some of the top European teams have come second here and we knew that we needed to play well and we prepared really well from our side. All credit to the playing group. I thought our play went pretty well. We put them under pressure. I thought we put a lot of pressure on their lineout. We did one or two things different defensively which I thought put them under pressure.

“The one we spoke about was using our opportunities this week and we literally got on a few yards away from the try-line and we got seven from it and the scoreline was 19-14 and we won by five points so it was a massive moment in the game.

“Some of the younger lads did really well. Some of plays of lineout, that break from Shane Daly – we are improving even in these conditions but I think the most important thing was the composure shown by the leadership group at the back end of the game.”

Their performance was also notable for such a sharp full competitive debut by their hugely talented 20-year-old scrumhalf Craig Casey.

“He’s a small man with a massive heart,’ said the Munster head coach. “He prepared well. He’s been waiting for the start for quite a while and he knew that after this European block he was going to get his shot. Some of the things that people don’t see like managing the forwards, I think he did that pretty well. The way he attacked and defended off scrums was very good. I’m really thrilled for him.”

Ireland-based Stephen Kenny can offer FAI welcome stability 06:00
Felipe Contepomi: Lockdown a double-edged sword for the likes of Johnny Sexton 06:00
Sonia O’Sullivan: Running in a bubble as the shoe wars raged 06:00
Joanne O’Riordan: Return to play is fraught with perils and possibilities 06:00
Stephen Kenny undaunted as a bold new era beckons for Ireland 06:00
Here is your handy guide to sport on television this week